When it comes to wiping a hard drive, a lot of people may think of the DoD 5220.22 M wipe standard. However, many of them don’t know what’s the best DoD wipe software. Now, get the answer from this post of MiniTool.

There are many different data wiping/destruction standards. DoD 5220.22 M is one of the most common data wiping standards. It is also known as the National Industrial Security Program Operating Manual or NISPOM which is a media sanitization standard established by the U.S. Department of Defense.

DoD 5220.22-M specifies the process of overwriting hard disk drives (HDDs) with binary patterns of “ones and zeroes”. This wiping standard requires 3 secure overwriting passes and verification at the end of the final pass. To be specific, it overwrites all addressable memory locations with a character (its complement), then a random character and verification to sanitize and wipe the information on your hard disks. 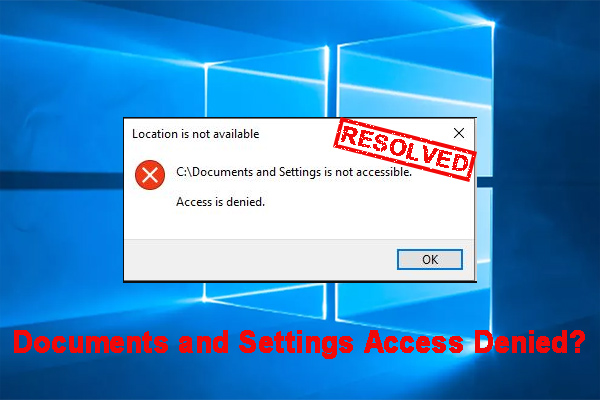 Have you come across the “Documents and Settings access denied” error? Now, this post helps you recover data from that folder and provides several fixes.

How does US DoD 5220.22-M wiping work? As mentioned above, the standard wipes a hard drive by overwriting the previously stored data with specific binary patterns reputedly through a specific of passes. It involves 3 secure overwriting passes as follows:

So, why did you choose the DoD 5220.22 M wiping hard drive? The DoD hard drive wipe provides one of the most standard destructions methods. There are several main benefits of this wiping standard:

Of course, the US DoD 5220.22-M wiping standard also has some drawbacks which influence you to use other data erasing standards such as DoD 5220.28-STD. For that:

Can Data Be Restored After a DoD Hard Drive Wipe

Can data be recovered from a DoD hard drive wipe? This is the question that most people care about, especially those who want to sell their laptops for cash. The DoD 5220.22 M wiping process will overwrite your hard disk three times and verify it continuously. Sometimes it may take you several hours to complete the wiping procedure for a large hard drive. So, it’s hard to recover data from the DoD disk wipe.

Now, you should have an overall understanding of the DoD 5220.22 M wiping standard. More important is how to choose a DoD disk wipe utility. Let’s keep reading.

Is there a free DoD wipe software? Of course, the answer is “Yes”. If you are still searching for a DoD wipe tool, you can choose one from the following 6 data erasing programs.

The first and free DoD wipe software we want to introduce is MiniTool Partition Wizard. It is a powerful and trusted partition/hard disk wipe tool that uses the DoD 5220.22-M (3 passes) and DoD 5220.28-STD (7 passes) erasing methods.

With this powerful tool, you can wipe all the data on your hard drive permanently or wipe a single partition. It is very easy to operate just with a few clicks. To perform a DoD disk wipe on your computer, you can refer to the tutorial below:

Step 1. Run this program to enter its main interface, and then select the hard drive that you want to wipe and click on Wipe Disk from the left action panel.

Tip: If the hard drive contains a system partition, you will be prompted with a warning message. Click the Yes button to continue. If your computer cannot boot into the system, MiniTool Partition Wizard Bootable edition also helps you wipe a hard disk smoothly in the WinPE.

Step 3. Now, you can review the wiping result in the main interface. Click on the Apply button to execute this wiping operation.

However, DBAN can’t work with SSDs. It comes with a self-contained boot image that can be used to create a bootable drive. That is to say, you need to burn it to a CD/flash drive and then boot from it. This tool is more suitable for emergency or bulk data destruction. Click this hyperlink to know more details on how to use DBAN for wiping hard drives.

CBL Data Shredder (CBL) also supports the DoD 5220.22-M wiping method for hard disks. Like DBAN, it comes with a bootable version that has 2 forms to boot your Windows system via a disc or USB flash drive. To wipe the hard disk on a Windows operating system, you need to burn it to a CD/flash drive and boot from it to the program. In addition, it can delete an external drive with the Windows version.

With this free DoD wipe software, you can customize the wiping methods to include 1s, 0s, random data, or custom text with a number of secure passes. Its bootable version helps you identify how large each drive is on the Windows system. Now, it is available for Windows versions from Windows XP to Windows 11.

Eraser is a professional and well-designed data destruction tool that boasts many different data sanitization methods, including DoD 5220.22-M, AFSSI-5020, AR 380-19, RCMP TSSIT OPS-II, HMG IS5, VSITR, GOST R 50739-95, Gutmann, Schneier, and Random Data. It not only works with traditional hard disks but with SSDs.

As an advanced DoD hard drive wipe software, you can use Eraser to schedule data wiping with all the wiping precision you’d expect. It’s now available for Windows 11/10/7/8/XP and Windows Server 2016 through Server 2003.

Well, it has some inconveniences as well. For example, you can’t run this program directly to wipe the hard drive that Windows runs on, usually C. That is to say, you need to create a bootable data destruction drive and boot your system from it, then wipe your disk according to the on-screen instructions.

Disk Wipe is a completely portable data erasing tool that you can run from within Windows. This tool includes many data sanitization methods like DoD 5220.22-M, GOST R 50739-95, Gutmann, HMG IS5, Random Data, and Write Zero. It supports all Windows file systems (NTFS, FAT, FAT32) without installation.

It not only works with internal hard drives but SSDs and external drives like USB, SD cards, and other portable memory cards. It performs a quick format before wiping the disk, which greatly improves efficiency. Another advantage is that this tool is small and light.

Like the above DoD disk wipe software, Disk Wipe can’t be used to erase a drive that you have Windows running on. In addition, this software is said to work only in Windows XP and Vista, but some people reported that it can run on Windows 10/8 without any problems.

Hardwipe is a free and easy-use data erasing tool that runs from inside Windows. It can be used to wipe entire hard disk drives and SSDs with DoD 5220.22-M, GOST R 50739-95, Gutmann, Random Data, and Write Zero sanitization methods, as long as it’s not running on your primary drive.

It is very easy to use for everyone. You just need to load the drive that you want to wipe and choose a data sanitization method to wait for the wiping to complete. More important, it is available for the most recent version of Windows operating systems, ranging from Windows XP to Windows 11.

Which free DoD wipe software should you choose? According to the above information, I believe that you already have known the answer. MiniTool Partition Wizard owns more distinctive merits compared with other software.

It can be used to wipe hard drives/SSDs directly without creating a bootable drive first. Well, it has a bootable and portable version of MiniTool Partition Wizard as well if you need it.

What is the DoD 5220.22 M wiping standard? Which one DoD wipe software should I choose? This post analyzes all related questions in detail. Get it now! Click to Tweet

This post mainly focuses on the analysis of the DoD 5220.22-M data wiping standard. If you are seeking a DoD wipe tool, you can choose one from the recommended software. Of course, you can give us better suggestions about this subject by leaving them in the comment area. For any difficulty using MiniTool Partition Wizard, you can send us an email via [email protected].