Nowadays, more and more computer users would like to replace their old hard disk drives with SSDs, like Samsung SSDs. The problem is that they don't know the difference between different series like Samsung QVO vs EVO vs PRO. In this post, MiniTool will introduce that to you.

How to Interpret Samsung SSD Model: QVO vs EVO vs PRO

In addition, consumer-level SSDs are also divided into two categories: SSDs for retail customers and SSDs for OEM customers. QVO, EVO, and PRO usually appear in retail customer SSD models in the form of a suffix. To some extent, these suffixes indicate different technologies applied in NAND flash of these SSDs.

NAND SSD: What Does NAND Flash Bring to SSD?

This post introduces NAND SSD. It touches upon NAND flash, 2D NAND vs 3D NAND, and SLC vs MLC vs TLC vs QLC.

These technologies will have influences on Samsung EVO vs QVO vs PRO SSDs in the following aspects:

Previously, a memory cell stored only one bit of data, which was called SLC (Single-Level Cell). The SLC NAND flash chip has small capacity and high cost, which caused the SSD price to remain high at that time.

The SSD capacity increases while the number of NAND flash chips does not increase. As a result, the SSD cost is reduced. Therefore, if you search Samsung EVO, PRO, and QVO SSDs on Amazon, when they are in the same capacity, PRO SSD is the most expensive, then the EVO SSD, and finally the QVO SSD.

The MLC, TLC, and QLC also have influence on Samsung EVO vs PRO vs QVO SSD speed. In general, the performance of Samsung PRO SSD is the best, then the EVO SSD, and finally the QVO SSD. The reason lies in the writing and reading mechanism of NAND flash.

MLC flash has slower speed than SLC flash, because it stores two bits of data—00, 01, 10, or 11—and therefore it needs 3 threshold voltages to distinguish them. The more bits of data stored in the cell, the more the number of threshold voltages it needs. Then, the SSD need to take more time to identify the voltage signal, reducing the read and write speed.

As we all know, when SSD writes data, the master controller will erase the old data and then write new data. This process is called P/E cycle (program/erase). When the P/E cycle runs out, the SSD is likely to fail.

The approximate P/E cycle range of SLC, MLC, TLC, and QLC flash chips are as follows:

According to the P/E cycles, we can make a conclusion that the lifespan of Samsung PRO SSD is the longest, then the EVO SSD, and finally the QVO SSD. If you know the warranty of the Samsung QVO vs EVO vs PRO SSDs, this conclusion is not difficult to be proved.

In Samsung retail consumer level SSDs, you can distinguish whether it is a SATA SSD or a PCIe SSD based on whether the first digit of the model is 8 or 9. At present, the 860 series are the latest Samsung SATA SSDs and the 970 series are the latest M.2 NVMe PCIe SSDs. In this part, I will explain Samsung QVO vs EVO vs PRO by taking the two series as examples.

Samsung 860 PRO/EVO/QVO series are SATA SSDs, which means that all of them use SATA bus. But these series have various form factors like M.2, mSATA, and SATA III. In this part, I will show you Samsung 860 EVO vs QVO vs PRO SSDs.

Look at the following picture, which shows Samsung 860 EVO vs PRO vs QVO specs.

Note:
1. The sequential write performances are measured with Intelligent TurboWrite technology being activated. This technology will accelerate the write speed of the drive during data transfer. But if the buffer has been maximized, the TurboWrite will exit, resulting a significant drop in write speed.
2. TBW (Terabytes Written) indicates how much data a drive can write over its lifespan. For example, an SSD with 500 TBW means that the SSD can write 500 TB before it wears out.

From the above picture, you can see that there is no other difference in technology among Samsung PRO, EVO, and QVO SSDs, apart from NAND flash memory. But Samsung QVO, EVO, and PRO SSDs still vary in performance and warranty (you regard it as lifespan).

In a word, if you want a large-capacity and cost-effective SSD, you can buy 860 QVO. If you have no special demand, 860 EVO is sufficient. If you need an SSD that be used under heavy load, I recommended you to buy 860 PRO.

How to Make a Website - 3 Ways for You to Choose!

Samsung 970 Pro and 970 EVO SSDs are the company’s latest flagship SSDs for high-performance desktop and mobile applications. They adopt PCIe lanes, which make 860 series can't match them in performance. In this part, I will give you a brief introduction to Samsung 970 PRO vs EVO.

The Samsung 970 PRO vs EVO specs are shown like the following picture:

According to the above diagram, we can make a conclusion about Samsung 970 PRO vs EVO:

If you plan to replace your old hard drive with a Samsung SSD, you can use MiniTool Partition Wizard to migrate your system to new SSD without reinstallation. Please refer to the following steps:

What should you do before, during and after reinstalling Windows? Follow our steps and instructions to get a wonderful Windows as well as optimize the system.

Step 1: Connect your new SSD to your computer and then click the above button to buy MiniTool Partition Wizard. Install it and open it to get its main interface. Click on Migrate OS to SSD/HDD in the toolbar. 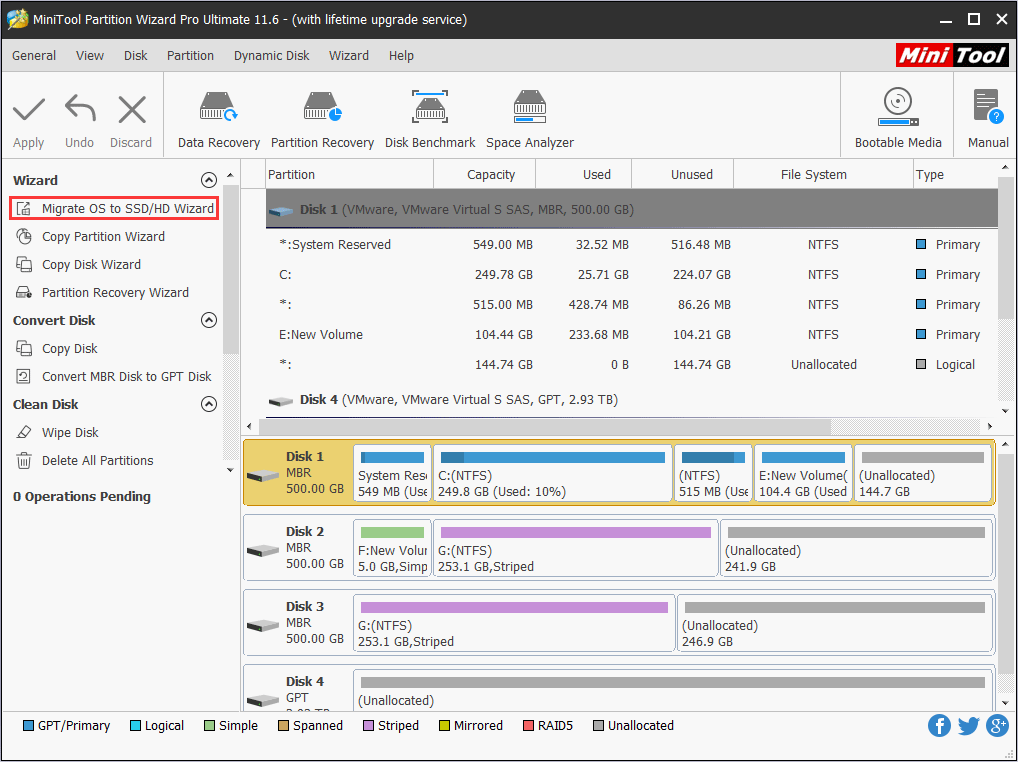 Step 3: Choose the new SSD as the destination disk and click Next. A warning window will pop up. Read it and click Yes.

Step 4: Choose right copy options and adjust the target disk layout, and then click Next. In this step, you should note that if the original disk is an MBR disk and the new disk uses GPT layout, you should check option Use GUID partition table for the target disk. Click MBR vs GPT to know more.

Step 5: Read the note and click Finish, then click Apply on the toolbar to execute the pending operations.

Step 7: Now, you can install the new SSD into your computer and boot from it.

Here is a post talking about Samsung QVO vs EVO vs PRO series. It also touches upon Samsung 860 QVO vs EVO vs PRO and Samsung 970 PRO vs EVO. If you are interested in Samsung SSDs, I recommend you to read this post.Click to Tweet

Has this post answered your questions about Samsung QVO vs EVO vs PRO? Is there anything that I have left out? Do you have other views on this topic? Please leave a comment in the comment zone. Besides, if you have difficulty in migrating OS, you can contact us via [email protected]. We will reply to you as soon as possible.

What is the difference between the QVO and EVO?
Samsung QVO SSDs use 4-bit QLC technology while EVO SSDs use 3-bit TLC technology. Due to this difference, QVO SSDs are cheaper and slower than EVO SSDs. In addition, the lifespan of QVO SSDs is also shorter than EVO SSDs.
Which is better Samsung Evo vs QVO?
In terms of performance and service life, Samsung EVO is definitely better than QVO. But in aspect of price, Samsung QVO is cheaper than EVO.
Is Samsung QVO good for gaming?
Running games on Samsung QVO is OK. But comparing QVO and EVO, I recommend you to run client games on Samsung EVO SSDs rather than Samsung QVO SSDs. Most client games require good random read performance. What worries me is that QVO SSD's speed will drop significantly when the buffer has been maximized and the TurboWrite exits, so using QVO SSD as gaming SSD is not as good as using EVO SSD as gaming SSD.