What Is God of War

God of War is a widely popular action-adventure video game developed by Santa Monica Studio and released by Sony Interactive Entertainment. It is the sequel to the 2010’s God of War 3 as well as the eighth installment of the God of War game series. With this game, you can freely explore the stories of ancient Scandinavia in the realm of Midgard.

God of War was initially released on April 20, 2018, for the PlayStation. Since its release, this game has received generally favorable reviews from worldwide players. So, a lot of gamers are eager for the release of the God of War PC version. Is God of War on PC? What time does God of War release on PC? Let’s find the answers from the following parts.

Is God of War on PC

Before the God of War PC release date, users can only play the game on PC with the help of emulators. It is so unstable and inconvenient for lots of gamers. However, as this game became one of the best-selling PS4 games in 2021, more and more gamers call for the release of the God of War PC Steam version.

So, can you play God of War on PC now? Of course, Yes! Sony released the “God of War for PC” version with a Windows port on January 14, 2022. According to a survey, the God of War PC Steam version had sold about 1 million units by March 2022. Up till November 2022, the total sales of the game have reached 23 million units.

However, the God of War for PC is not free to play on Windows. To download and install from Steam or Epic, you need to pay $49.99 for the game. In addition, you need to meet the minimum God of War PC requirements before you get the game. 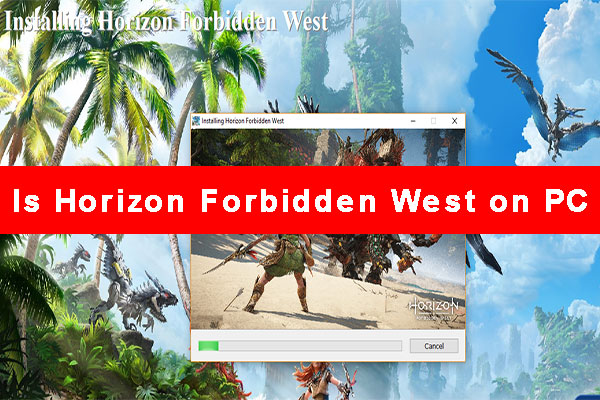 What Time Does God of War Release on PC

What’s the God of War PC release date? According to the official words, the global release date of the game comes on January 14, 2022, at 8 am PST, 11 am EST, and 4 pm GMT. The PC game version can be downloaded from both Steam and Epic launchers, while the pre-loads are already available on Steam.

How to Play God of War on PC

This part will show you how to set up God of War for PC. Here we will explain this process in the following three sections. Make sure you follow them one by one until the game is installed on your PC successfully.

Before You Set Up the God of War PC

Before you get the God of War PC downloaded/installed for Windows, it’s important to make sure your computer meets the minimum system requirements of the God of War. Here we summarize them as follows:

If you are not sure whether your PC meets the God of War requirements, you can refer to the following simple guide to check that:

Step 1. Press the Win + R keys to open the Run dialog box, and then type msinfo32 and hit Enter.

Step 2. In the pop-up System Information window, you can check the OS version, System Type, Memory, and Processor (CPU) from the System Summary section. You can expand the Components category to identify the Storage and Display (Graphics Card).

If you are unclear about the dedicated video RAM space on your computer, you can refer to this post “What Is Video RAM (VRAM) and How to Check VRAM Windows 10?”.

How to Meet the God of War PC Requirements

According to the above information, God of War for PC is a system source-demanding game, especially requiring a large amount of hard disk space to run. If your computer doesn’t meet the minimum system requirements of the game, you will encounter the God of War PC crashing or some other issues.

Among all the system requirements, 70 GB of free disk space may be challenging for most users. How to free up so large disk space at one time? When it comes to this topic, most of us may want to delete unnecessary large files/folders or remove some apps/programs. It is time-consuming and ineffective.

However, another common circumstance is that the game partition or C drive is full but other partitions have free space. In this case, a more effective way is to integrate all free/unallocated space into the game partition using a professional partition manager. MiniTool Partition Wizard is such a tool. It can help you create a large enough partition for the God of War PC game.

The first and simple method is to extend the game partition using the MiniTool software. For that:

If you want to move the unallocated/free space to be contiguous to the partition you want to extend, you may use the Move/Resize Partition feature. To extend the C drive without boot issues, we highly recommend you use the bootable MiniTool Partition Wizard Edition.

Step 2.  Select the drive that you want to take free space from the drop-down menu, and then drag the slider bar to occupy the free space or input the specific volume. Then click on OK.

Well, if your hard disk comes with a small size capacity and you don’t want to delete any data, then upgrading to a larger HDD/SSD should be a better choice. Here the MiniTool program can help you upgrade the hard disk without reinstalling OS.

Step 1. Install the larger hard disk to your PC carefully if there are multiple disk trays.

If your computer can be installed on only one disk, you just need to migrate OS to the target disk and install it on your computer.

Step 3. Select the target disk that you want to migrate OS to and click on Next. Then click on Yes to confirm this operation.

Step 4. Select a copy option based on your needs and click on Next.

Step 5. Read the information and click the Finish button in the next window. Finally, click on Apply to execute the pending operations.

Step 6. Now, you can enter BIOS and set the new SSD/HHD as the default boot disk.

Further Reading: If other hardware components or system software of your computer don’t meet the requirements, you can refer to the following guides.

Step 1. Open the Steam Store page, log in to your account, and search for God of War.

Step 2. In the pop-up window, click on Buy now and follow the on-screen instructions to complete the purchase.

Step 4. Select a Language from the drop-down menu, click on OK, and click on Next to continue.

Step 5. Tick the check box next to I accept the terms of the License agreement and click on Next.

Step 6. Select a location to save the installation folder and click on Install. Then it will start downloading/installing the game.

Step 7. Wait for the God of War PC installation to complete. This process may take you a while depending on your computer specs. Once done, you can start playing the game on Windows PC.

I want to play God of War on Windows. Is God of War on PC? What time does God of War release on PC? How to set up the game? This post explains these questions in detail.Click to Tweet

Can you play God of War on PC? Now, I believe that you already have known the answer. If your computer doesn’t meet the God of War PC requirements, you can refer to the methods we explained above to fix the problem.

If you have other opinions about this topic, write them down in the following comment zone. For any difficulties, while using MiniTool Partition Wizard, you can contact us by sending an email to [email protected].