CPU vs GPU bottleneck, what are they and how to get rid of them? Find the answers in this essay. If you’d like to learn more related information, just go to MiniTool partition master official website.

Have you ever encountered such a situation: when you are having a big fight with your enemies in your favorite game, suddenly, the picture gets blurry due to FPS drops. This will surely influence your mood and bring you a bad temper. Why do such things happen?

To learn the CPU GPU bottleneck, first of all, you should know what does “bottleneck” means. Bottleneck, literally, means the neck or mouth of a bottle, which decides how much water or contents the bottle can contain. So, the bottleneck also represents a junction that impedes traffic flow.

Similarly, if your CPU is much faster than your graphics card, the GPU bottleneck occurs. The processor executes the actions, audio, and other processes in the game, while the graphics card, also called video card, charges the visual pictures of the game. Thus, if the CPU capacity is much large than the GPU, you will see a smooth game but with a fuzzy screen; this is caused by the graphics card bottleneck.

So far, you get to know what triggers the GPU CPU bottleneck. Yet, besides the unbalanced physical hardware components, the game software is also the cause of the bottlenecks. Games have a high FPS rate with low-resolution graphics (CPU dependent games, like Minecraft, Civilization V and Assassin’s Creed: Black Flag) will cause CPU bottleneck if your processor is slow.

How to Fix CPU and GPU Bottleneck?

Either processor bottleneck or video card bottleneck appears, you both get a dim scene. So, to solve the bottleneck problem, you should first figure out which bottleneck issue you are facing with. To do that, you need the help of a monitoring software like Prime 95 (which is also a CPU stress test program), MSI Afterburner or HWiNFO.

Download and install one of those hardware monitoring tools on your PC, open it while gaming and let it monitor the computer components of your machine. If the CPU usage is high while the GPU usage is low, you have a CPU bottleneck and the game is processor dependent. Vice versa, if it has a high usage of graphics card while low usage of central processing unit, you have a GPU bottleneck and the game is graphics card dependent.

This article introduces everything you should know about GPU stress test, including its definition, utility, risk, operation guide as well as assistant tools.

After figuring out what kind of bottleneck you have, you can now set to fix the problem. The solution is to balance the processing speed of both CPU and GPU.

How to Fix CPU Bottleneck?

If you have a CPU bottleneck, it means that your processor can’t catch up with your GPU. Then, you can slow down your graphics card to make it have a similar rhythm with the CPU. To do that, you can adjust the game graphics to higher, like 4K, resolution. Thus, with a heavy workload, the GPU needs more time to render the high-resolution pictures.

Vice versa, if you have a GPU bottleneck, you can increase the task load of your CPU to slow it down. In general, make GPU and CPU work at normal speed will reduce the chance of getting a bottleneck.

Solution 1 is to settle the bottleneck issue by reducing the amount of data waiting to be processed, so, the bottleneck component does not have to be used in high-level or working at high speed to meet the requirement.

Besides the first method, you can also handle the bottleneck problem by reducing the workload of the bottleneck component. Thus, if its CPU bottleneck, you can end unnecessary background processes in Task Manager. Then, you will witness a great increase in-game FPS.

Similarly, to reduce CPU workload in the game will also lower the chance of experiencing CPU bottleneck. To achieve that, you can lower in-game CPU-bound settings, especially effective for CPU-intensive games. Those settings include but not are limited to lowering draw distance, turning off music and sound effects, and lowering video settings.

Overclock the CPU is to make the processor work to its utmost speed that may exceed the certified speed by its manufacturer. Therefore, the CPU can handle the data at a much faster speed without bottleneck issues happen.

Tip: Nowadays, most CPUs can be overclocked, especially game CPUs.

Is It Good to Overclock Your CPU? Let's Figure It out

Random Access Memory influences the CPU performance greatly, and it involves in the processing work of the CPU. Therefore, to overclock the RAM will also optimize the performance of the processor.

How to Fix GPU Bottleneck?

Unlike CPU bottleneck, there are fewer fixes for GPU bottleneck, such as lower graphics settings, overclock GPU and RAM, as well as upgrade GPU. Yet, getting a GPU bottle is somehow better than getting a processor bottleneck, for you won’t see a glitching or stuttering monitor. 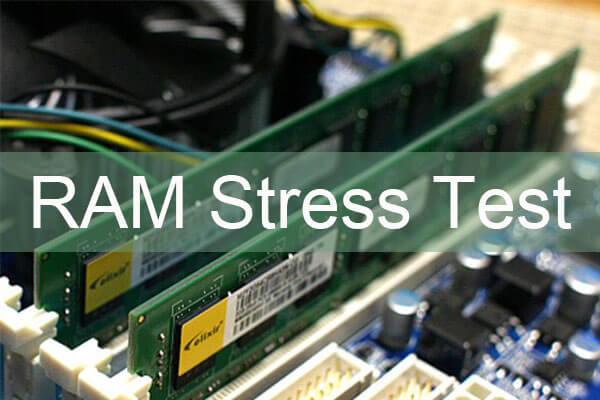 Everything You Should Know About Memory/RAM Stress Test

This post covers all information about the RAM stress test or memory load test including its definition, necessity, method and tools.

Generally, the bottleneck issues, either CPU or GPU, are usually caused by the unbalanced component work speed. To avoid the problems, you should choose the right CPU and GPU combo when you buy a computer. Also, you should select the computer components in line with the video games you usually play. For choosing the right CPU and GPU pair, you can use a CPU bottleneck calculator to test them online.