This post focuses on SSD cache, including its definition, main types, benefits, as well as limitations. Based on that, MiniTool illustrates you how to use SSD as cache on AMD and Intel systems respectively.

What Is SSD Cache

SSD cache is a data management system that uses a small solid-state drive as cache for a larger hard disc drive. It is termed as SSD caching that is known as flash caching. SSD caching is the temporary storage of data on NAND flash memory.

Tip: The cache is hardware or software memory that is used to store the regularly used data and then you can access the data easily and quickly. For instance, the CPU cache consists of flash memory that has faster access than standard system RAM.

The SSD cache feature is a controller-based solution that caches the most frequently accessed data onto lower latency SSDs. This operation can dynamically improve system performance. The SSD cache is exclusively used for host reads.

Note: Though SSD caching can boost the overall experience and performance, it affects the lifespan of the SSD. Do SSD drives fail? Here is a full analysis on SSD technology.

The core concept of SSD caching is to offer a much faster and more responsive SSD that works as a temporary storage unit for storing requested data like OS operational scripts.

In primary cache, each I/O operation must store data through the cache to execute the operation. In this sort of cache, the data usually is stored in DRAM after a host read.

Differently, SSD cache is only utilized when System Manager views it’s beneficial to put the data in cache to increase system performance. The data in SSD cache often is copied from volumes and stored on two internal RAID volumes that are created automatically when creating an SSD cache.

Note: The internal RAID volumes are used for handling internal cache. Moreover, these volumes are not accessible or shown up in the user interface. But they are counted in the total number of volumes allowed in the storage array.

QNAP NAS supports SSD caching and auto-tiering. Qtier technology automatically transfers data between SSDs and hard drives on the basis of their access frequencies. Qtier IO-awareness reserves a cache-like space to improve IOPS performance. However, Qtier is only supported by x86-based NAS (Intel or AMD) and 64-bit ARM-based NAS with 2GB RAM and QTS 4.4.1 (or later).

The RAM requirements vary according to the QNAP NAS cache capacity.

What Does an SSD Do? Here Are the Answers and Steps to Use It

What is SSD? What does an SSD do? How do SSDs work? This post will focus on these questions and talk about some other issues related to SSD.

There are three main types of SSD caches. Here, we will introduce them one by one.

Write-around SSD caching: It is a process to directly write the data to the primary storage by bypassing the cache initially. The data that will be firstly sent to the actual SSD is cached finally. Besides, there is no cache to move things to the cache. So, it will be slower to move this data back to the cache.

Even though, the system is still efficient as the data will be copied back only when the data is identified as “hot”. Nevertheless, it could result in high latency when loading the recognized “hot” data back to the cache. It implies that the cache won’t disappear from irrelevant data.

Write-back SSD caching: It writes data to the SSD cache first and then sends it to the primary storage device. Though caching is much better than normal read-write operations, it causes low latency for both write and read operations.

If you encounter cache failure, the cached data will lose. Hence, manufacturers often apply this caching to products to make duplicate writes. 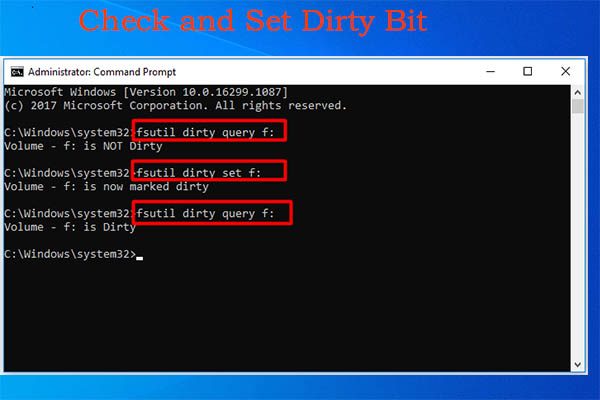 Dirty Bit: What Is It & How to Set/Clear/Reset It

What is dirty bit and what does it mean? How to set, reset, and remove dirty bits on computers? To get the answers, read this post with attention.

Benefits and Limitations of SSD Cache

After putting your system into a clean state, you will get an obvious benefit that is brought by SSD caching. The OS can enter the usable state faster than a non-SSD cached system. Likewise, it would be much faster to launch Steam and favourite games with SSD caching after a reboot.

Tip: You will go into a clean state by booting up a computer after it’s been off, restarting OS, or running an application after a restart or power down. The memory hierarchy runs from the CPU cache to RAM, SSD cache, and then HDD.

Intel builds the SSD caching technology – Smart Response Technology. The proprietary iteration of the mechanism is only available on SRT-ready motherboards with Intel chipsets. Besides, Intel doesn’t run the technology of all its chipsets, which limits the hardware configurations that you can expect to have. But it can still run SSD caching.

If your processor is AMD, you need to use third-party software to emulate SSD caching as AMD because AMD hasn’t developed or integrated a rival technology into AMD chipsets. For example, you can use programs like FancyCache and PrimoCache.

What is Hiren’s boot CD? How to set up and use it? This post will make replies to these questions and offer you an alternative to it.

How to Use SSD as Cache

No matter your computer has an Intel or AMD processor, you can use an SSD as a cache. The requirements and steps are different on the two processors. Similarly, you are recommended to make a backup for your system or data before starting the process. The section below illustrates the details.

Note: Thanks to the release of StoreMI, AMD users can use SSD as a cache.

Part 1: Back up the System or Data

Here is a tutorial on how to back up data with MiniTool Partition Wizard.

Step 1: Download and install the program by clicking the button below and following the on-screen instruction.

Step 2: Connect a storage device to your PC.

Note: The connected device should have a capacity larger than the used space of the disk to be backed up.

Step 5: In the next window, choose a target disk for the copied disk and click Next. Here, you should click the connected disk. If you have backed up the data in the target disk, click Yes in the prompted warning window to continue the process.

Step 6: You can review the changes in the Copy Disk Wizard window. Then choose copy options and change the selected partition based on your demand. After that, click Next.

Note: If you copy the disk to an SSD drive, it’s recommended to pick the Align partition to 1MB option as it can improve the performance of the disk. If the destination disk is a GPT one, you should select the Use GUID Partition Table for the target disk option.

Step 7: Click Finish to save the changes you’ve made. After backing to the main interface, click Apply to execute the pending operation.

How to use SSD as a cache? Here we will show you how to do that on AMD and Intel systems respectively.

Tip: You can check whether your PC is AMD or Intel system by opening File Explorer > right-clicking This PC > choosing Properties.

If you want to use SSD as a cache for your HDD on the AMD system, make sure your system meets the following minimum configurations.

Step 1: Set the BIOS SATA disk settings to AHCI not RAID. For that, you should:

Tip: StoreMI requires at least Windows 10 19H1 or later. If you install the program via the Express option, you can view the present disk configuration and check the setup of the drive through the AMD Drive Controller information option

Step 4: If the system doesn’t choose the drive automatically, you should select an available empty SSD or HDD from the list manually.

Note: When the capacity of the SSD exceeds 256GB, you will receive a message stating that the rest space can be used as a normal drive.

Step 6: After the system boots up, check that the device has booted from the StoreMI by opening Disk Management. From here, you can also extend the capacity of the boot volume.

Step 7: Right-click on the C partition and click Extend volume. Then follow the prompted instruction to expand the capacity.

Also read: How to Increase Disk Space for Laptop? Try These Methods Now

Here’s the guide on how to use SSD as cache on the Intel system. At first, you should also ensure that your system meets the requirements below.

Step 1: Set the SATA mode to the RAID mode, and then save and restart the system.

Step 3: Run the Intel RST software to go to its main interface.

Step 4: Tap the Enable acceleration option under the Status or Accelerate menu.

Step 5: Select the SSD as the cache device.

Step 6: Choose the size from the SSD to allocate as cache memory. The rest of the SSD space can be used for storing data.

Step 7: Select the RAID volume drive that you would like to accelerate.

Step 8: Choose either the Enhanced mode or the Maximized mode based on your demand.

Tip: The Enhanced mode (write-through) optimizes data protection. The Maximized mode is also referred to as write-back, which optimizes the input/output performance. If you are not sure, pick the Enhanced mode.

Here is a post talking about SSD cache Windows 10, including its main types, benefits, and limitations. More importantly, it shows you how to use SSD as cache. Click to Tweet

What is SSD cache? How to use SSD as cache? This post offers you the answers and more details about SSD cache Windows 10. If you have any thoughts on SSD cache, please share them with us in the following comment area. For any issues while using MiniTool software, contact us by sending an email via [email protected].