What is the failure rate of SSD drives? To figure out this question, lots of experiments are needed. Fortunately, Backblaze, a cloud storage and data backup company, uses both HDDs and SSDs in its cloud storage and backup services. In addition, it releases its HDD and SSD failure rates every year. 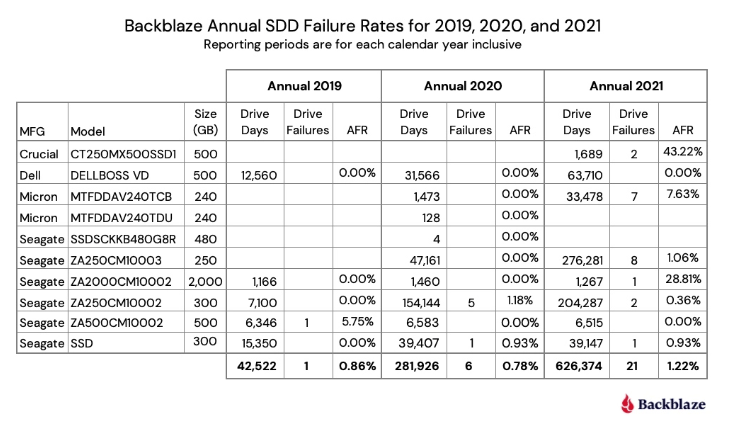 What is AFR? It is also called Annual Failure Rate or Lifetime Annualized Failure Rate. Its calculating formula is (drive failures / (drive days / 365)) * 100. As SSDs age, AFR can be used to see trends over time. If you want to know more details about the 2021 SSD failure rate, you can go to this post.

At the time of writing, Backblaze has released its SSD failure rate report for Q1 and Q2 2022. As of the end of Q2 2022, SSD lifetime annualized failure rates are as follows:

If you want to know more details about Q2 2022 SSD failure rate, you can go to this page.

By Q2 2021, Backblaze has used SSDs for 5 years. It compares the HDD failure rate and the SSD failure rate in the five years and finds that SSDs are more reliable than HDDs.

As for whether the SSD failure rate will go up rapidly someday, we need to wait for the report from Backblaze.

SSD VS HDD: What's Difference? Which One Should You Use in PC?

Enterprise SSD vs Consumer SSD, Which One Is Your Best Choice

How much do you know about enterprise SSD and consumer SSD? In this article, you will get the differences between these two types of SSDs and further details.

What is Mean Time Between Failures? It is the ratio of the cumulative working time of the product to the number of failures in the total use stage. It reflects the quality of the product. The fewer product failures, the higher the MTBF, and the higher the product reliability. But please note that the MTBF doesn’t reflect the infant mortality stage and the wear-out stage.

Infant Mortality: When the product is just produced and powered on, its failure rate will be high due to factors such as yield rate. SSD manufacturers will conduct aging tests for a certain period on all products to expose the possible early failure of the product to the greatest extent, ensuring that the products received by customers do not have early failure problems.

Wear-Out: Due to factors such as wear and aging, the failure rate of products will increase exponentially with time.

In addition, AFR and MTBF can be converted into each other. In general, the numerical correspondence between MTBF and AFR is as follows:

[Solved] Is SSD Good for Long Term Storage: Past VS Now

Is SSD good for long term storage? This post will answer it with opinions in the past and now mainly based on the effects of temp, read/write and memory charge.

Due to the inherent characteristics of NAND flash, SSD’s data retention ability will decrease with the temperature increase. Therefore, when the operating temperature of the SSD goes up, the real failure rate will go up, too.

At the same time, as the service life increases, more and more data will be written, and the SSD will get closer and closer to its end of life. The failure rate will increase. In addition, age will also affect the physical units in the SSD, increasing the SSD failure rate, too.

If you increase the amount of data written every day, it is equivalent to accelerating the consumption of SSD life (SSD TBW), which can accelerate the occurrence of failures.

What is SSD TBW (Terabytes Written)? It indicates how much data a drive can write over its lifespan. For example, the TBW of the Samsung 990 PRO PCIe 4.0 NVMe SSD 1TB is 600, meaning that this SSD can write 600TB before it needs to be replaced.

What to Do If an SSD Fails

Whatever SSD you use, you may meet SSD failure one day. When an SSD fails, the data may be lost. Fortunately, before an SSD fails, some symptoms will tell you that the SSD is to fail. For example:

Do SSD Drives Fail: A Complete Analysis on SSD Technology

Do SSD drives fail? Here is an overall analysis on how reliable SSD is, why SSD fails, how it fails, how to extend SSD lifespan and how to copy SSD data.

Here is the guide on how to use MiniTool Partition Wizard to check bad blocks on the SSD:

Step 2: On the pop-up window, click Start Now button. It will test every block on the SSD and give the result. Red blocks mean bad blocks while green blocks mean fine blocks. If there are too many red blocks, it means that the SSD is to fail.

If your SSD is to fail, you may need to clone the SSD to back up the system and data on it. In this case, I recommend you use MiniTool Partition Wizard. Here is the guide:

Step1: Connect an external hard drive to the PC. Launch MiniTool Partition Wizard. Click on Copy Disk Wizard in the toolbar. Then, click Next.

Step 2: Select the SSD that is to fail and click Next.

Step 4: On the Review the changes window, keep all to the default options and click Next.

Of course, sometimes the SSD may fail suddenly and you have no time to back up your system and data. In this case, you can also use MiniTool Partition Wizard to recover your data. As for the detailed guide, you can refer to this post: Hard Drive Dead? Try the Best Dead Hard Drive Recovery Solution.

Is this post useful to you? Do you have other opinions about the SSD failure rate? Do you know more information about SSD MTBF? Please share them with us in the following comment zone. I will appreciate that very much.

In addition, if you encounter problems when using MiniTool Partition Wizard, please feel free to contact us via [email protected]. We will get back to you as soon as possible.