What are Destiny 2 system requirements? Can I run Destiny 2? In this post, MiniTool displays Destiny 2 minimum specs and Destiny 2 recommended specs. In addition, it also shows you how to judge whether your PC meets the Destiny 2 requirements.

Destiny 2 is a free-to-play online-only multiplayer first-person shooter video game developed by Bungie. It was released for PlayStation 4 and Xbox One on September 6, 2017, followed by a Microsoft Windows version the following month.

Destiny 2 is the sequel to 2014's Destiny and its subsequent expansions, but Destiny 2 was praised as having a "more robust story" and an actual fleshed out villain.

The storyline of the game is that under the command of warlord Dominus Ghaul, the alien race Cabal assaults the Earth's last safe city. As a result, human lose the last refuge and the power of the city's Guardians is also deprived.

In this situation, the players, as the Guardians, set out on a journey to regain their power and find a way to defeat Ghaul and his Red Legion army and take back the Last City.

Of course, Destiny 2 also retains some excellent gameplay of the original Destiny. The game features expansion packs which further the story and adds new content and missions.

In addition, the activities of this game are also divided among player versus environment (PvE) and player versus player (PvP) game types. PvE features three-player "strikes" and six-player raids, while PvP features objective-based modes, as well as traditional deathmatch game modes.

Due to the above virtues, Destiny 2 was nominated for and won various awards, such as at The Game Awards 2017 and Game Critics Awards. It can be said that Destiny 2 is one of the best selling games of this decade.

Have you played Destiny 2? Do you know the error code Anteater on Destiny 2? This post will show you how to fix the error with some effective solutions.

As Destiny 2 can be played on PC, some users will ask what Destiny 2 requirements are and they may worry that their PCs can't meet Destiny 2 PC requirements. In this part, I will introduce Destiny 2 minimum specs and Destiny 2 recommended specs, respectively.

These are just Destiny 2 minimum specs, which allow you to run the game, but the screen settings (like shadow, lighting, anti-aliasing, motion blur, vertical synchronization, etc.) should be the lowest and the picture performance can barely reach 30 frames.

Of course, the specific gaming performance of computers that have just reached the minimum requirements may vary depending on different games. But if possible, I recommend you to make your PC meet the recommended requirements.

The above are Destiny 2 recommended specs. If your PC meets the above requirements, you can run Destiny 2 much smoothly on it.

How to stop Destiny 2 from initializing? You are able to get 8 solutions to the problem Destiny 2 stuck on initializing in this post. Feel free to have a try.

Can I Run Destiny 2?

Can I run Destiny 2? Or, can my PC run Destiny 2? To answer these questions, you should check your PC's configuration to see whether it meets Destiny 2 PC requirements. Please follow the steps below:

Step 2: Skip to Display tab to check Display Memory (VRAM). In this step, some people may not know the differences among Approx. Total Memory, VRAM, and Shared Memory. Their differences are as follows:

Step 3: Open File Explorer and click This PC to see whether there is enough storage space for Destiny 2.

Can Your PC Run This Game? 3 Steps to Get the Answer

The post is divided into three parts to help you tell if your PC can run the game you like and upgrade your PC to make it meet the game system requirements.

2. Judge Whether They Meet the Destiny 2 System Requirements

According to the above knowledge, you can judge whether your CPU meets the Destiny 2 PC specs. For some experienced users, they can judge that quicker just from the CPU serial number, especially when the CPU belongs to Intel Core or AMD Ryzen series.

What Should You Do If Your PC Doesn't Meet Destiny 2 System Requirements?

Your PC may not meet Destiny 2 System Requirements for the following reasons:

This post shows you how to get more RAM on laptop by upgrading RAM and freeing up RAM.

If your PC is in case 5, there are two situations you should consider.

1. There is no single partition that has 105 GB free space.

If the whole disk has 105 GB free space, but there is no single partition having enough space, in this situation, you can solve the problem by extending or moving/resizing partition. As for the tool, I recommend you to use MiniTool Partition Wizard. Please follow the steps below:

Step 1: Click the above button to free download MiniTool Partition Wizard. Launch this software and go to its main interface. Right-click a partition you want to extend and click Extend option.

Step 2: Click the arrow to expand a dropdown menu and choose a partition from which you decide to take free space. Then, drag the sliding block to decide how much space you want to take from that partition. Then, click OK button.

Step 3: Click the Apply button to execute the pending operation.

If you want to create a separate partition to Destiny 2, you can use Move/Resize feature. 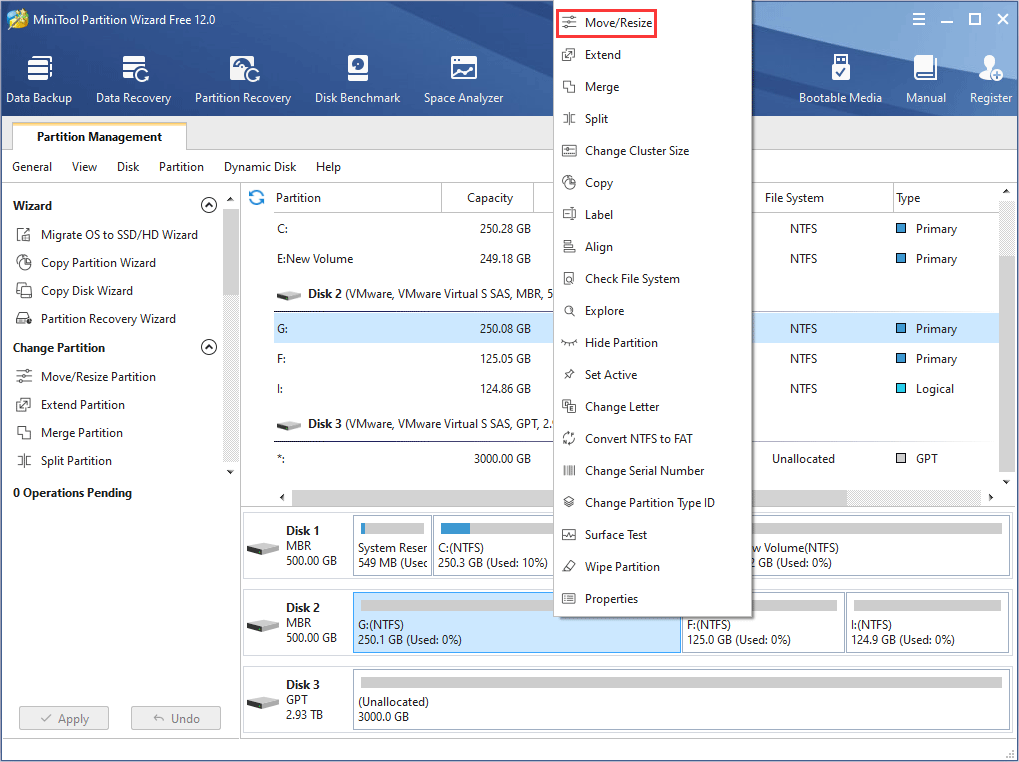 Step 2: Drag the arrow to shrink the partition. Then, click OK button.

Step 3: Click on the unallocated space and choose Create to make a partition for Destiny 2.

If the whole disk doesn't have 105 GB free space, you can use the following two methods to solve the problem:

Here is a post talking about Destiny 2 system requirements. If you want to play Destiny 2 on PC, I recommend you to read this post first.Click to Tweet

Is this post helpful to you? Do you have other ideas about Destiny 2 PC requirements? Please give us feedback in the comment zone. In addition, if you have difficulty in extending/moving/resizing partition, freeing up disk space, or migrating OS, please contact us via [email protected]. We will reply to you as soon as possible.

Can Destiny 2 run on 4GB RAM?
Destiny 2 requires at least 6GB of RAM. This is its minimum RAM requirement.
What PC do I need for Destiny 2?

A PC can be used for Destiny 2, as long as it meets the following requirements: