This essay from Partition Wizard mainly answers the question of what does CPU stand for. Read it through and you can find similar definitions from different sources. Also, you can learn more CPU-related knowledges here.

What Is CPU Stand for?

In relation to a computer, what do the letters CPU stand for?

What does CPU stand for in computers?

What is the meaning of CPU?

What does CPU stand for in terms of computer?

What does the acronym CPU stand for?

What does abbreviation CPU stand for?

What does CPU stand for in texting?

What does the term CPU stand for?

What Does CPU Stand for?

This article gives a CPU hierarchy of 5 tires in the form of a chart for gamers of different levels. The list consists of both AMD and Intel processors.

What Does CPU Stand for and What Does It Do?

Just as mentioned in the above content, the abbreviation “CPU” means “Central Processing Unit”, which is the most important part of computer hardware. It functions just like the brain to a man. Computer users send orders to the machine. The CPU receives the orders, analyzes them, converts them to the signals that can be understood by other computer components, and sends the signals to related components to execute. Finally, users get what they want from the machine.

Yet, CPU needs to cooperate with other computer components to do its work, such components like motherboard (the head of a computer), GPU, RAM, monitor, mouse, keyboard, and so on.

According to dictionary.com, CPU, also called central processor or microprocessor, is the key component of a computer system, which contains the circuitry necessary to interpret and execute program instructions. It is the “brain” of a computer. CPU is where data manipulation actually takes place. The results of these manipulations are then stored in the computer memory (RAM). CPUs carries out this function in personal computers (PC).

According to Wikipedia, the CPU, also known as a main processor or processor, is the electronic circuitry in a computer that performs orders that make up a computer program. It executes basic arithmetic, logic, controlling, and input/output (I/O) operations specified by the instructions in the program.

The computer industry made use of the term “central processing unit” early in 1955. Traditionally, the term “CPU” refers to a processor, more specifically to its processing unit and control unit (CU), distinguishing these core elements of a computer from external parts like main memory and I/O circuitry. 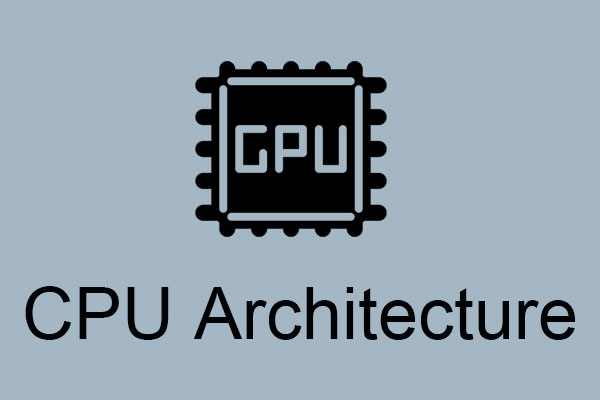 This post gives a brief introduction to the CPU architecture based on PC processors. Generally, the 3 CPU components are ALU, registers and CU.

A chipset is a set of electronic components in an integrated circuit known as a “data flow management system” that manages the data flow between the processor (CPU), memory and peripherals, which is usually found on the motherboard.

A CPU socket, or CPU slot, contains one or more mechanical components offering electrical and mechanical connections between a microprocessor and a printed circuit board (PCB, a part of the motherboard), which enables you to place and replace the CPU without soldering it on the motherboard. The popular CPU socket types are AM3+, AM4, Socket F, FM2+, TR4 Socket, LGA 775, LGA 1366, LGA 2066, etc.

What Does CPU and GPU Stand for?

As it has described above, CPU is the acronym of Central Processing Unit. How about GPU? Actually, in a computer, GPU stands for Graphics Processing Unit, the visual system of a computer. it can be regarded as the eye of human. Unlike CPU, GPU specially works on dealing with graphics-related tasks, such as the scenes in your games. So, the frame rate (FPS) of your games or movies are controlled by your GPU(s).

Tip: A computer can own more than one GPU cards, also called video cards. While there is only a single CPU for the PC.

See also: CPU VS GPU: What’s the Difference Between Them? A Guide for You!