Do you know about the commonly used hardware RAID and how to manage it? This post can give you the answers. With MiniTool Partition Wizard, you can manage your RAID smoothly.

Hardware RAID has many advantages in data processing and data storage. Therefore, it is frequently used in many different areas. For those who are unfamiliar with hardware RAID, after you read this article, you will have a better understanding about hardware RAID.

A RAID distributes data across several physical disks and presents itself to the operating system and the user as a single disk. There are several possible different arrangements of RAID. These RAID standards are referred to as levels. Among them, three RAID levels below are used most commonly.

In order to explain RAID structure clearly, we assume here that all the disks are of the same capacity.

Striped Disk Array without Fault Tolerance: It provides improved performance and additional storage but no fault tolerance. When data is written to a RAID 0 drive, the data is broken into fragments. The number of fragments is dictated by the number of disks in the array. The fragments are written to their respective disks simultaneously on the same sector.

This writing mode improves writing speed and allows smaller sections of the entire chunk of data to be read off the drive in parallel, giving this type of arrangement huge bandwidth. On the other hand, a single disk failure will destroy the entire array because RAID 0 does not implement error checking.

Mirroring and Duplexing: It provides fault tolerance from disk errors and failure of all but one of the drives. Read performance is increased when using a multi-threaded operating system that supports split seeks, while the writing performance is slightly reduced.

Array continues to operate so long as at least one drive is functioning. Using RAID 1 with a separate controller for each disk is sometimes called duplexing.

The array will have data loss in the event of a second drive failure and is vulnerable until the data that was on the failed drive is rebuilt onto a replacement drive.

Many people don't know how to partition RAID 5 with a reliable software. Read this post to see how to manage RAID with the best dynamic manger Minitool Partition Wizard.

How to Manage Hardware RAID Partition

Hardware RAID can be used to improve the disk performance or to ensure data security. It is widely used in enterprises or by some individual users who want a better computer performance. However, in order to maximize the performance of the hardware RAID as well as optimize its data reliability, you still need a reliable RAID management software to help you manage it.

If you use MiniTool Partition Wizard, you don’t need to spend much time on data backup when expanding hardware RAID space. You just need to resize RAID in minutes by the following steps:

Step 1: Insert a new hard disk to the existing hardware RAID and organize this RAID using RAID controller. Then you can have some unallocated space on this RAID.

Step 2: Buy MiniTool Partition Wizard and launch it to go to its user interface. Right-click the RAID partition you need to extend and select Resize/Move. 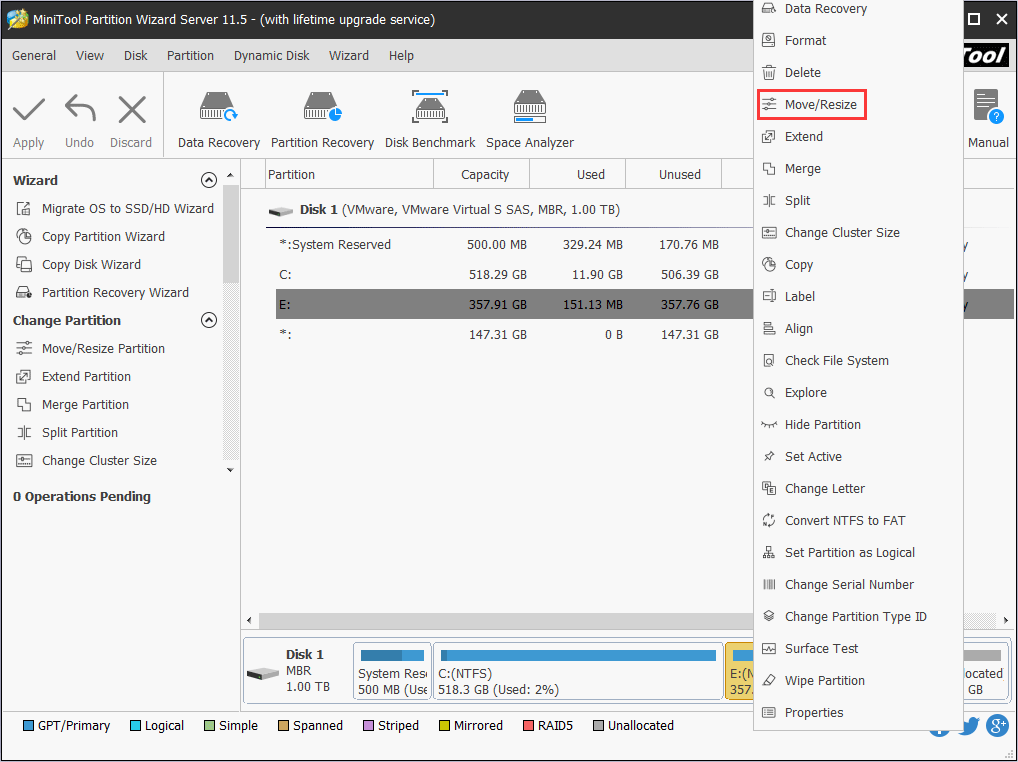 Step 4: A popped-up dialog box indicates the current size of the partition. The box also depicts the used and unused space on the partition and the free space surrounding the partition (if any exists), and the minimum and maximum sizes that you can resize a partition to.

Then, you can expand hardware RAID without data loss. Certainly, there are other features built in MiniTool Partition Wizard, which can optimize RAID performance and protect data.

This article explains what RAID is, what Storage Spaces is, and the differences between Storage Spaces and RAID. It includes explanations on hardware RAID, hardware-assisted RAID, software RAID, and common RAID types.

Here is an introduction to the commonly used hardware RAID levels. You can read this post to know about them and to know how to manage them.Click to tweet