At the end of 2021, Steam announced its most played games of 2021. Are you wondering what others are playing? Check the list in this post from the MiniTool Partition Wizard website.

Steam is a video game digital distribution platform developed by Valve, available on various platforms, including Microsoft Windows, macOS, Linux, iOS, and Android. It was first released in 2003. With Steam, users can download, install, launch, and manage games released by Valve as well as some games from other game developers.

Steam games are quite popular among game lovers, with millions of active users on Steam. And as one of the best game platforms, Steam organizes its most played games, top sellers, and new releases every year. At the end of 2021, Steam announced the most played games 2021. Let’s see the lists in the following content. It should help if you are looking for the best multiplayer games on Steam.

The list of Steam’s most played games includes games that have the highest numbers of players through December 15, 2021. And here are the top 10 games:

The top two are the best free games on Steam. Some of them are cross-platform, which means users can play games on different devices. DOTA 2, CS: GO, and GTA 5 have been on the list for several years.

In addition to the listed Steam games, there are some other popular games like Minecraft, Roblox, Crossfire, League of Legends, Fortnite, etc.

Windows 11 is released. As a game lover, you might ask “does Steam work on Windows 11”, “how to install Steam on Windows 11. Figure them out in this post.

According to the gross revenue, Steam makes a list of its top sellers. Here are some of them:

The Most Popular New Games

In addition to old games, Steam released a huge number of new games in 2021. And here are the top new releases, according to Steam:

In the new year, you can also expect upcoming games. Here are the top wish lists, according to Steam.

There are still some new games without a specific release date. You can pre-purchase the games that you are interested in on Steam so that you can play them once they are released.

If you are looking for the best games on Steam, then you should have a look at the list of most played online games 2021. Pick one or two from them and have a try. You might love it. Hope this post is helpful for you and good luck! 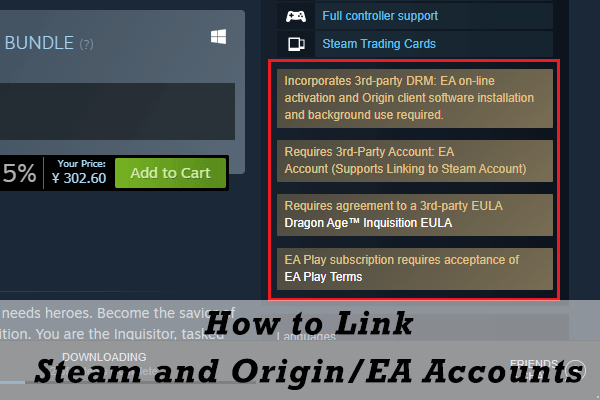 How to Link Steam and Origin/EA Accounts? Here Is the Tutorial