Dying Light 2 is an open-world survival horror game published by Techland on February 4, 2022. This game is now available for multiple platforms, including Microsoft Windows, PlayStation 4, PlayStation 5, Xbox One, and Xbox Series X/S. Since its release, Dying Light 2 gains wide popularity among game fans. 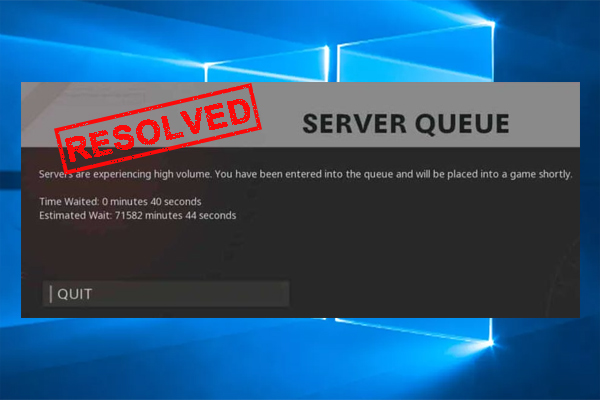 Have you come across the server queue COD Cold War error? Now, you come to the right place. This post provides several effective ways to fix the error.

What causes the Dying Light 2 co op not working issue? According to a survey, we find the problem often occurs when players can’t connect to the Dying Light 2 servers or the connection drops during the gaming. In addition, some other factors like internet connection issues, corrupted game files, and temporary glitches can trigger the Dying Light 2 multiplayer error too.

How to Fix Dying Light 2 Multiplayer Not Working

After investigating extensive user reports and posts, we find the following 6 effective ways. Let’s try them in order until the Dying Light 2 multiplayer not working PS4/PC/Xbox issue gets solved.

First of all, you need to make sure that you have finished the game’s prologue to unlock the multiplayer mode. If you haven’t made it playable yet, then you will run into the Dying Light 2 co op not working problem frequently. According to the official support page of Techland, Dying Light 2 can't join friends before finishing the Markers of Plague

# 2. Restart the Game and Your Platform

Sometimes the Dying Light 2 online co op not working issue just occurs because of a temporary glitch. In this case, a simple restart of the game or its console can help fix the issue. This can easily be done on various platforms on PC, PS4, and Xbox. To do so, access the main menu of the game and close the game by clicking on Quit and then on Yes. Then restart the game and see if the issue is fixed.

As mentioned above, one of the main reasons behind Dying Light 2 co op not working issue is an unstable internet connection. In this case, resetting your network settings or restarting your router may help fix the problem.

Step 1. Unplug the internet router from the wall socket.

Step 2. Hold the Power button on the back of your router for about 15 seconds until the router is turned off completely.

Step 3. Then wait for about 5 to 10 minutes, plug the router back into the socket and press the Power button to restart it.

After that, you can restart the game and check if the Dying Light 2 invite friends not working issue gets fixed.

# 4. Verify the Integrity of the Game Files

Another possible reason for the problem is missing or corrupt game files. So, we recommend you verify the integrity of the game file via Steam. By doing so, the corrupted files can be replaced accordingly.

Step 1: On the Steam interface, head over to the LIBRARY tab.

Step 2: Locate the Dying Light 2 game, right-click it, and choose the Properties option.

Step 3: Switch to the LOCAL FILES tab and then click the VERIFY INTEGRITY OF GAME FILES option.

You can navigate to the UPDATES tab, and select Always Keep This Game Updated to keep the game updated and see if it can solve the problem.

There is a chance that the game servers may be offline or under maintenance when Dying Light 2 is unable to join game Xbox/PS4. If none of the above methods work, it’s necessary to check the official Dying Light 2 server status vis its official Twitter page.

In addition, it’s reported that Steam does a weekly scheduled network maintenance test on Tuesdays between 1 p.m. and 3 p.m. PDT. If you play the game via Steam during that period, you may encounter the Dying Light 2 online co op not working issue. So, you’d better avoid that.

Are you still troubled by the Fallout 4 low FPS issue? Don’t worry. This post will analyze the possible causes of the issue and provide corresponding fixes.