In order to understand Windows Powershell better, let’s start with the concept of Shell in computer science first. A shell is a user interface that enables you access to various services of an operating system as an administrator, which can support command lines and also include a graphical user interface.

In November 2016, the first version of Powershell was released by Microsoft for Windows XP, Windows Server 2003 and Windows Vista. Now, Powershell is an open-source project, it can be installed on Windows, Mac OS, and even Linux platforms.

As a kind of command-line shell and scripting environment, Windows Powershell enables command-line users and scriptwriters to take advantage of .NET Framework. It was designed to specify and automate tedious tasks by creating scripts and combining multiple commands.

Every coin has two sides, so does Powershell. Here we summarized its obvious merits and demerits.

Windows Powershell boasts many advantages. Compared with CMD, the biggest merit is that Powershell enables administrators to perform remote management on the network. Besides, it has many other advantages below:

Windows Powershell requires NET framework to run. There are a few security risks and other inconvenience you need to pay attention to as well.

What Applications Can Be Used for Executing Powershell Scripts

When to Use Windows Powershell

If you were a network administrator or IT worker, then you will find this tool is helpful in working with Active Directory. That’s because there are hundreds of customized commands called by cmdlets, which make you more productive. So, it’s recommended that Windows Powershell knowledge is a worthwhile skill to grasp.

However, sometimes average users are confused about the differences between Windows Powershell and CMD. In the following part, we will give readers detailed information about Windows PowerShell VS CMD. Let’s keep reading to use this powerful program smoothly.

Users can run all kinds of commands to manage your computer, such as use diskpart.exe command to start managing your hard drive.

Windows Powershell is a new Microsoft shell that combines the old CMD functionality with new scripts/cmdlets. The cmdlets are self-contained programming objects that show the underlying administration options inside of Windows. It can be used to specify complicated tasks with reusable scripts so as to save time.Well, users can also utilize some practical Powershell commands to manage your computer.

Here is a form that can help you comprehend the differences between them intuitively:

Right now, I believe you have a general understanding of Powershell. More importantly, what should we do to use Windows Powershell as a beginner? Please keep reading patiently, here are some basic Powershell commands for a novice.

How to Open Windows Powershell

Type Windows Powershell in the search box and hit the Enter button. Well, you can select Run as administrator or Open file location.

Then you will get a pop-up window like this.

As a beginner, you need to know three kinds of PowerShell commands: get-command, get-help, and get-member. These basic commands will empower us to apply task-based cmdlets.

Powerful commands are known as cmdlets. They are specialized commands in the form of a verb-noun string to perform specific functions. If you grasp this template, it’s not difficult to guess the meaning of any cmdlets.

In fact,using this command by itself isn’t particularly helpful. It is mainly used to outputs all commands available to you in your current session. You can find the specific commands you want to work with.

Try it now, type get-command in the window of Powershell.

Then as it shown to us, you can view the command type, version, name and source. For instance, if you want to find all commands that begin with the letter “c”. Just type get-command c* and hit Enter button.

As mentioned above, powershell cmdlet names reflect the “verb-noun” template, so if you want to see all cmdlets that use verb get, just need type get-command –verb get (please note the space behind command).

Well, you can do the same thing with noun. It can help users to output a set of commands that affect the same type of object. For instance, if you want to see what cmdlets are available for managing services, just type get-command -noun service and hit enter.

This command enables you to find a list of all available services on your computer, including running and stopped services. Type get-help * in the window and hit Enter.

After opening this list of available help topics, users can get help on specific cmdlets, such as get-help get-service. Try it now.

Or you can also view the same results if you type: get-service -? (Note: There should be a space after Service.)

Or you can display services that contain a searching string. Type Get-Service -Displayname "*network*" to view all network-related services.

Tip: press shift+\ on the keyboard simultaneously to get “|”.

This cmdlet enables users to find the members, the properties and methods of a project. Let’s see the specified examples about get-member command.

Type get-service | get-member to view the properties and methods of the process objects.

Note: This command uses the pipeline operator “to send the output of a Get-Service command to Get-Member”.

If you want to get all of the members (properties and methods) of the service objects that represent the services on the system, just type Get-Service | Get-Member –Force command. (press shift+\ on the keyboard simultaneously to get “|”)

Right now, three basic Powershell commands are told to you. You can run these commands based on your own needs.

How to Manage Your Hard Drive with Powershell

As we mentioned above, Windows Powershell is similar to CMD, and some users manage their hard drive by using the Diskpart command in CMD. Do you know how to use Powershell commands to manage your hard drive partitions? Here we take extending and shrinking partition for example.

There are detailed steps to guide you in extending and shrinking partitions.

Step 2. In the pop-up window, type diskpart and hit enter.

Step 3. Type list disk to get all disks on your computer.

Then you can type shrink desired=*(e.g.: size=1000 MB) to shrink the partition and hit Enter. Or you can repeat step 3 to step 6 to select another disk or partition to shrink.

Although this is a powerful tool, sometimes you may have difficulty in extending or shrinking partitions. For example, you receive the error message: “there is not enough usable space to extend partition” but in fact, there is enough free space.

So, why not choose a more convenient and simpler tool to manage your hard drives.  MiniTool Partition Wizard is the best partition manager that enables you to move/resize partition easily and freely in Windows 10/8/7. Besides, this powerful software also enables you to create a CD/DVD or USB flash bootable media when system crash.

Let’s see how to resize partition with MiniTool Partition Wizard.

Step 1. Launch this powerful software. Then select a target partition and click Move/Resize partition feature from the left action panel. 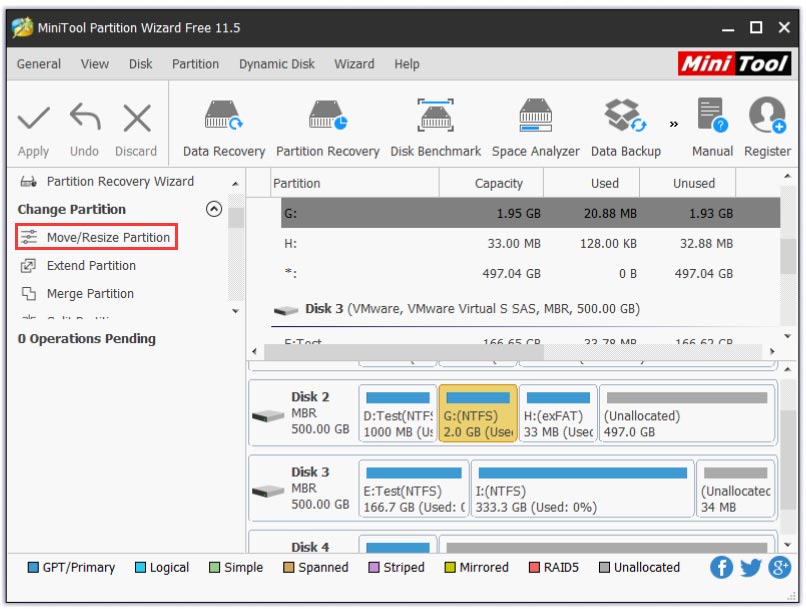 Step 2. Then you have three options:

In addition to resizing partition, this program has other powerful features such as convert MBR to GPT, change drive letter and so on.

Besides, if you fail to resize partitions when using Powershell, there is another effective alternative for you. Any questions, please contact us via [email protected]. Welcome to share your ideas in the comment area.