What command can be used to rename file CMD? A lot of users are confused about this question. Now, this post of MiniTool explains the CMD rename file process using different examples.

As it’s well known to us all, CMD (Command Prompt) is a powerful Windows built-in command line tool. This tool can help users to do many different works such as CMD ping test, CMD list files, CMD copy files, CMD list drives, CMD check WiFi password, and more. However, lots of users are unclear on how to rename file using CMD. Here’s a true example from the StackOverflow forum:

When it comes to renaming file on Windows, most people may want to use File Explorer. But it is time consuming and boring if you need to rename a lot of files. A more effective way is to rename file using CMD. How to make Windows CMD rename file? Let’s keep reading. 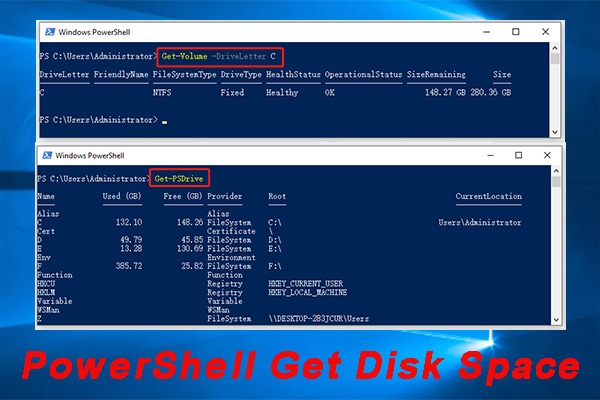 How to check disk space PowerShell Windows 10/11? Now, you come to the right place. This post focuses on PowerShell get disk space and provides an alternative.

What Command Can Be Used to Rename Files

You can neither specify a new drive or path for the renamed file nor rename file CMD across drives. In addition, the Filename2 must be a unique file name, or you will encounter the “Duplicate file name or file not found” error.

How to Rename Files in Command Prompt Windows 10/11

Now, you should have an overall understanding of the Windows CMD rename file syntax. Here we will show you how to rename file in CMD via several specified examples. Let’s start trying.

Step 1. Press the Win + E keys to open the File Explorer and navigate to the path in which you want to rename files.

Step 2. Click on the address bar and type cmd in the file path and hit Enter. It will direct you to the file path in Command Prompt.

Step 3. In the pop-up Command Prompt window, you can rename file CMD according to your needs. Here we summarize several frequently asked questions.

If you want to rename multiple files at one time, you can utilize the wildcard character. The following example renames all file in the current directory that ends with .xml to .txt.

Example 4. CMD Rename a Directory with a Space

For example, if you want to rename the E:\Server 2016 directory to Windows Server 2016, you can navigate to the path using CMD as we explained above, and run the following command.

If you are renaming a file or directory with a space, the name must be surrounded by quotes.