How to Upgrade to Solid-state Hybrid Drive (SSHD)? [Clone Disk]

What is SSHD? Compared with SSD and HDD, which one do you want to pick? This post introduces the three types of hard drives and shows how to test the speed of the SSHD and upgrade to it.

If you want to upgrade your hard drive for a computer, the term SSHD will break into your life. SSHD short for solid- state hybrid drive is a combination of the traditional hard drive and the new solid-state drive. In other words, this type of hard drive embraces a faster storage medium like SSD with a higher-capacity HDD.

Why does producers develop this kind of hard drive? The purpose is to improve performance by combining the higher-speed SSD to the cost-effective HDD with large storage capacity. In this way, the SSD in an SSHD is to act as a cache for the data stored on the HDD.

Each of the following way optimizes the overall performance of this kind of hard drive.

Way 2: Combine SSD and HDD into a single hybrid volume by the computer’s operating system software, which provides an easier experience.

Way 3: By chipsets external to the individual storage drives. An example is the use of flash cache modules (FCMs). FCMs combine the use of separate SSD (usually an mSATA SSD module) and HDD components, while managing performance optimizations via host software, device drivers, or a combination of both.

According to the above content, you may have some clues about the question: How does an SSHD work?

For the SSD portion of SSHD, SSHD technology works by taking advantage of a relatively small amount of high-performance NAND flash solid state memory to store the most frequently used data. For the traditional HDD portion of SSHD, it is used to hold the bulk of your lesser used files.

SSHD technology has boasted a huge improvement since 2007.

Although this new type of hard drive disk is a combination of SSD and HDD, please pay attention that it is still a traditional hard drive essentially.

SSHD VS. SSD VS. HDD

You may be confused about picking SSHD, SSD or HDD. Don’t worry. The following shows their advantages and disadvantages respectively. After comparing, you may know which one you should pick.

Pros and Cons of SSHD

Cons of SSHD: SSHD only has one format that is SATA format.

Pros and Cons of SSD

What is SSD? SSD stands for a solid-state drive that is made by NBND FLBSH. This storage drive comes with NAND flash memory instead of the spinning magnetic platters which you can find in the HHD.

It is worth noting that this kind of hard drive, unlike the traditional hard-drive disk (HDD), doesn’t have to move mechanical components like actuator arm, hence it features a very compact packaging, which makes it common in laptops.

Cons of SSD: SSD is only affordable at a lower cost. Large-capacity is still expensive.

Pros and Cons of HDD

What is HDD? HDD stands for Hard Disk Drive. This kind of hard drive has the rapidly spinning, circular platters and a read-write head which can move across them physically and scan for your wanted data parts.

All in all, compared with SSD and HDD, the biggest advantage of SSHD is that this kind of hard drive comes in larger capacity with reasonable price and high performance. Therefore, with respect to the balance of storage, price, and performance, you can pick SSHD.

If you want to spend the absolute minimum amount of money, you have the third choice that is buying an HDD. But please click SSD vs HDD  to know more details in first and then make a decision.

To know the speed of your SSHD, it is recommended to apply Disk Benchmark feature of MiniTool Partition Wizard. The feature built in this software is designed to measure performance using various transfer sizes and test lengths for both sequential and random read/write speed.

Tip: It is likely to take a long time to complete the tests especially when the transfer size has a large span. A temporary file will be created by MiniTool Partition Wizard during the testing process, but it will be deleted when finished.

Step 1: Run MiniTool Partition Wizard and launch it to get its main interface. Find the Disk Benchmark feature in the toolbar and then click it.

Step 2: Select the partition on SSHD you want to test and then click the Start button.

Note: The Cool Down Time function is to reduce the hard drive temperature, and you can reset a cooling time.

Step 3: Wait patiently until this feature finishes the SSHD speed test and shows you a complete graphical result.

Now, you have learned about the speed of your SSHD. The following content will show you how to upgrade to SSHD for your computer.

In order to upgrade to SSHD, it is highly recommended you to apply the third-party software MiniTool Partition Wizard which is a useful toolkit to help you manage your hard drives in many aspects, such as deleting partition, extending partition, moving partition, and so on.

How to upgrade to SSHD with MiniTool Partition Wizard? There are two items you need to do.

In Disk Management, an SSHD will be displayed as two parts, namely SSD and HDD. Therefore, to experience high performance, you are suggested to migrate your operating system to the SSD, and then copy the other partitions to the HDD.

Step 1: Buy MiniTool Partition Wizard by clicking the offered button and then launch it to get its main interface.

Step 2: Click the Migrate OS to SSD/HD feature from the left panel. 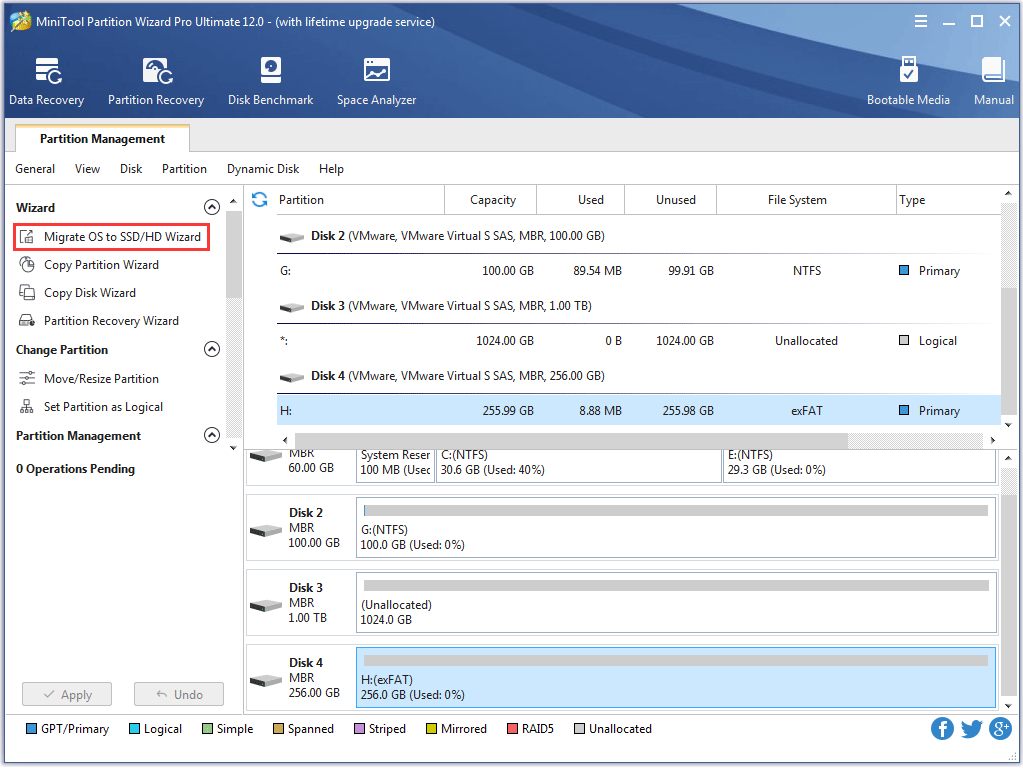 Step 3: Choose a right method to migrate system disk and click the Next button.

Step 4: Select the target disk to migrate system disk and then click the Next button. Here we recommend you to set the SSD of SSHD as the target disk.

Note: This step will destroy all the data saved in the target disk, hence please make a backup in advance.

Step 5: Choose a copy option. There are four copy options. To learn about them more, please read the following content. Then click the Next button.

Step 6: Once get a pop-up window, please read the note carefully, and then click the Finish button to continue.

Step 7: After going back to the main interface, you need to click the Apply button to complete these changes and click Yes in the pop-up prompt window to allow changes.

The operating system has been migrated to SSHD. The second thing you should do is to copy other partitions to the HDD.

Here is the tutorial on copying partitions to the HDD with MiniTool Partition Wizard.

Step 3: Select the partition you want to copy (here you should copy non-system partitions on the original disk, and we just take copy partition E for example) and then click the Next button.

Step 4: Select the Unallocated space to save the copy and then click the Next button to continue.

Note: Unallocated space should be large enough to save all data on the source partition.

Step 5: Resize the new partition by moving the handle, and then click the Finish button.

Step 6: Click the Apply button to execute the changes.

MiniTool Partition Wizard is a useful toolkit to help me upgrade my hard drive to SSHD. Click to tweet

After finishing migrating and copying, you should go to BIOS to set the SSHD as the first boot.

We Want Your Voice

After reading this post, do you figure out what SSHD is and the differences among SSHD, SSD, and HDD? Do you know how to upgrade your original fard drive to the SSHD? Hope you can give positive answers.

If you still are bothered by the questions concerning SSHD vs SSD vs HDD or the operations about upgrading to SSHD, please don’t hesitate to let us know. You can send an email via [email protected] or leave your questions below this post. Thanks in advance.

Is a hybrid SSD worth it?
There is no clear answer to this question because the value of SSHD depends on your usage. Just keep in your mind that SSHD is recommended if you seek high performance and less cost.
What is 1TB Firecuda SSHD?

FireCuda SSHD is one kind of hard drive designed by Seagate. This drive boasts high performance, large capacity, and endurance. One of the target audiences the Firecuda is pushed at is gamers. The reasons are displayed below.

What is SSH vs SSHD?
Here SSH and SSHD are not any kind of hard drive. SSH is the command that you use to connect to the remote machines (the client). SSHD is the daemon that is running and allows others to connect to the machine (the server).
Does hard drive go bad if not used?
Different from RAM, hard drive does not need electricity to keep data once it has been written. A standard SATA drive can store and maintain your files for extremely long periods of time. When the hard drive is going failing, you will see the 6 signs that indicate hard drive failure.