Is your Xbox Series X crashing frequently? This post from MiniTool Partition Wizard tells you what to do if your games on the Xbox Series X console crash to the home page. You can try the 4 easy ways.

The Xbox Series X, the successor of the Xbox One, is the home video game console developed by Microsoft and released on November 10, 2020. It can support higher display resolutions (up to 8K resolution), along with higher frame rates and real-time ray tracing. It also has a high-speed solid-state drive (SSD) to reduce loading times.

Of course, this issue happens to not only one game, but also many games. Then, how to solve this issue? You can try the following methods.

Xbox Series X vs Series S: which one is better? You can make a wise choice after learning the main differences between the two game consoles. 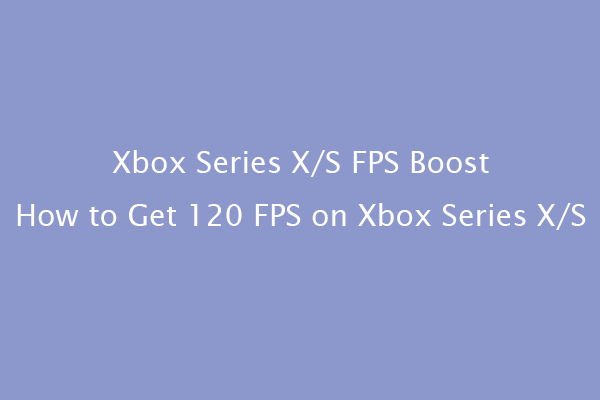 This post introduces the Xbox FPS boost features and lists many Xbox Series X/S FPS boost games. It also shows you how to play 120 FPS on Xbox.

Resetting the console can solve most of the crashing issues. If the above methods don’t work, you can try this method. Here is the guide:

The former option will reset the OS and delete all potentially corrupted data without deleting your games or apps, while the latter option will delete all user data, including accounts, saved games, settings, home Xbox associations, and all games and apps.

A user reported that he had sent the device for service, but it was returned to him without any repairs, as the service center did not find any issues. Then, he explained the situation once more and provided video evidence to Microsoft Support. This time, Microsoft gave him a replacement unit. Then, no crashes since the replacement.

If your Xbox Series X keeps crashing still, you can also try this method.

How much storage does the Xbox Series X have? How to expand its space? This post will explain that and provides you with 2 ways to increase space.