Do You Need a Memory Card for Switch? You Need One [Partition Manager]

Do you need a memory card for Switch? Nintendo suggests adding a memory card when Switch internal space dies out. How to put SD card in Switch? That is easy to complete. Scroll down to see more details.

Do You Need a Memory Card for Switch?

Nintendo Switch comes with only 32GB of internal storage, but there is actually 29GB free for actual usage. 6.1GB of the 29GB space is set aside for operations and other software apps, which means the space users can utilize is approximately 23GB.

Tip: Is there almost no free space on your hard drive? If yes, you can try to free up it or you can directly upgrade to a large hard drive with MiniTool Partition Wizard.

So, to expand the internal storage on Switch, you can consider investing an SD card for the console. Once you install an SD card in your Switch, the console will automatically store downloaded games and screenshots to the SD card until it gets full.

How to Put SD Card in Switch?

It is easy to put an SD card in Switch. The tutorial is below.

Note:
1. If the SD card you want to put in your Switch contains data, the console will ask you to format it. Therefore, do not forget to back up the data before performing the following operations.
2. If the SD card you use is a micro SDXC card, you will be asked to update the system to use it.

Step 2: Flip the console and open the kickstand in the back of the console.

Step 3: Insert your SD card carefully. After that, power the console on and you will see the Sd card storage space is displayed on the Data Management window.

How to Transfer Data to the SD Card?

Thanks to the update 10.0.0 for the Switch console released on April 13, 2020, you can transfer data from the console to the SD card easily (and vice versa). However, the data does not include the save data — the data can only be saved in the console’s system memory.

Let’s see how to use the added function to transfer data between Switch and an SD card.

Step 1: Click the Settings icon on the main interface to launch the System Settings window. 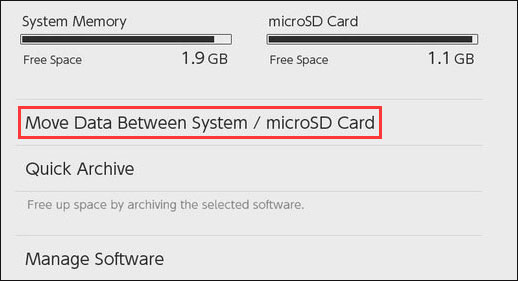 Effectively Fix - 3DS Could Not Detect an SD Card

This article helps the 3DS detect an SD card by formatting it, removing its viruses or malware, and replacing it with a new one. Try them now.

Have you had the answer to “do you need a memory card for Switch”? Putting a memory card in Switch can help you save a large number of screenshots and other data to get back the space taken by these files.

If you run into some issues when putting your SD card in Switch, you can leave them in the following comment and we will help you deal with them as soon as possible.