This article shows 3 reasons for the combination of Western Digital and SanDisk. Besides, this article displays a necessary toolkit MiniTool Partition Wizard to help you manage your SSD and other storage devices easily and conveniently.

Why WD did that? There were 3 main reasons.

Western Digital, founded 49 years ago, is an industry-leading developer and manufacturer of storage solutions that enable people to create, manage, experience and preserve digital content, and it has its traditional business model built around volume business from the PC ecosystem.

However, according to the Wall Street Journal, Western Digital was facing challenges to its core hard-disk-drive business in the past years, which has been under pressure from the success of sales of Apple Inc.’s iPad and other tablet computers that store data on flash-memory chips rather than on magnetic disks.

Here, this combination represents another effort by a leading vendor from traditional IT computing repositioning itself for the demands of digital IT computing.

SanDisk is a global leader in flash storage solutions. For more than 27 years, SanDisk has expanded the possibilities of storage, providing trusted and innovative products that have transformed the electronics industry.

WD boasts its HDDs for a long time. But with the development of SSDs, SSDs have displaced HDDs in higher-end tablets and PCs over the past few years since the former is smaller, faster, and doesn't have damage-prone moving parts, which put a big impact on Western Digital.

From the image above, you can see the competition in the SSDs market. Western Digital just held 10.2%. That is to say, to enter the SSD market, WD needs to buy other companies like SanDisk for more market share.

Why does WD choose to acquire SanDisk rather than any other companies like INTC, and Samsung?

If WD plan to buy INTC (one of the world's largest and highest valued semiconductor chip makers, based on revenue), the cost would be much higher.

Besides, it’s clear that Samsung will not work with WD since it has sold HDD division to Seagate with keeping its SSD business. And, WD didn’t acquire Micron largely because Micron’s SSD technology was in its infancy.

What is NAND flash memory? It is a type of non-volatile storage technology that does not require power to retain data.

SanDisk is a major player in the NAND flash memory market with flash products spanning consumer flash cards and USB sticks to client and enterprise SSDs as well as storage systems and supporting software.

WD PC HDD business is declining because of the weak PC market but also because SSDs are encroaching that space.

Without access to NAND flash at cost, it would be difficult for WD to participate in that space and to compete with NAND players in the enterprise space.

According to Jeff Janukowicz, research vice president at IDC, this combination could give WD an instant foothold in the global, non-volatile NAND flash memory market, securing long-term access to SSD technology at a lower cost.

There is another factor: competition.

Seagate has already made strategic purchases in flash technology, including product lines that are direct competitors to SanDisk in the enterprise.

WD needed to access to SanDisk's NAND technology to better compete in the market for solid-state drives used in cloud computing, data centers, smartphones, and laptops.

As the storage industry attempts to reorient itself with an eye on the future, the acquisition seemed like a very canny move on the part of the hard disk giant.

With this acquisition, WD gets the substantial non-volatile memory (NVM) intellectual property and acquired flash memory manufacturing through the SanDisk jointed venture with Toshiba. In addition, this combination enabled WD to vertically integrate into NAND.

For Both WD and SanDisk

Besides, WD and SanDisk's complementary product lines (HDDs, SDDs, cloud datacenter storage solutions and flash storage solutions) will provide the foundation for a broader set of products and technologies from consumer to data center.

The two sides have strong R&D and engineering capabilities and a rich base of fundamental technologies with over 15,000 combined patents issued or pending worldwide.

Finally, this combination could undoubtedly trigger other mergers and acquisitions in the storage component business. Within a few years, the non-volatile memory industry could undoubtedly look much different than it does today.

Necessary Tool for WD and SanDisk Users to Install

Next, we are going to introduce a program that can help you get most from both WD and SanDisk's products like HDDs, SDDs, memory cards and USB drives.

In the information age, mechanical hard disk drive, solid-state drive and other storage devices including SD card and USB drive play a great role in our world.

For instance, we store massive important data and files on hard disk drive and SSD; we install or transfer our operating system to SSD to optimize computer performance; we use USB drive to transfer some data.

However, it is believed that many people have ever encountered partitioning problems and data loss issues. For example, space of storage devices is missing; we failed to align SSD partitions or migrate OS. But fortunately, most issues could be easily solved by MiniTool’s products.

# Extend the Partition Which Runs in Low Disk Space with MiniTool

Someday you may find one of the partitions on your SSD (especially boot partition) just has several GB or less free space left. At this time, it’s a wise choice to use the Extend Partition feature provided by MiniTool Partition Wizard, because it can help you enlarge the partition without any data loss.

Here is the tutorial on extending partition via MiniTool Partition Wizard.

Step 1: Download this software, install it and launch it to get its main interface.

Step 2: In the Disk Map, select the partition which runs in low disk space, and click the Extend Partition feature from the left panel. (Here I take partition E for example)

Step 3: Choose an unallocated space or existing partition from the drop-down list of Take Free Space from to take free space to enlarge the previously selected partition, and next drag sliding button to decide how much space to take. Finally, click the OK button.

Step 4: Click the Apply button to make all changes performed.

As we know, under Windows 7 and later Windows OS, all newly created partitions will be aligned automatically.

However, if a partition on SSD has been operated (for example, we changed its size), it may become unaligned. Moreover, if partitions on SSD are copied from other disks, they are always unaligned.

In those cases, we need to align its partitions to enhance data read-write speed and optimize disk performance. For more information, please see the recommended article to know how to align SSD partition.

Nowadays, more and more people choose to replace the old system disk with a new SSD to optimize computer performance.

For more details, please see our previous post Failed to Migrate Your Disk or System to SSD? Try This Way.

Actually, you can turn to the Migrate OS to SSD/HD feature of MiniTool Partition Wizard, which has been proved to work well for this issue.

Here is the tutorial.

Step 1: Connect your SSD to your computer (it had better be connected via SATA). 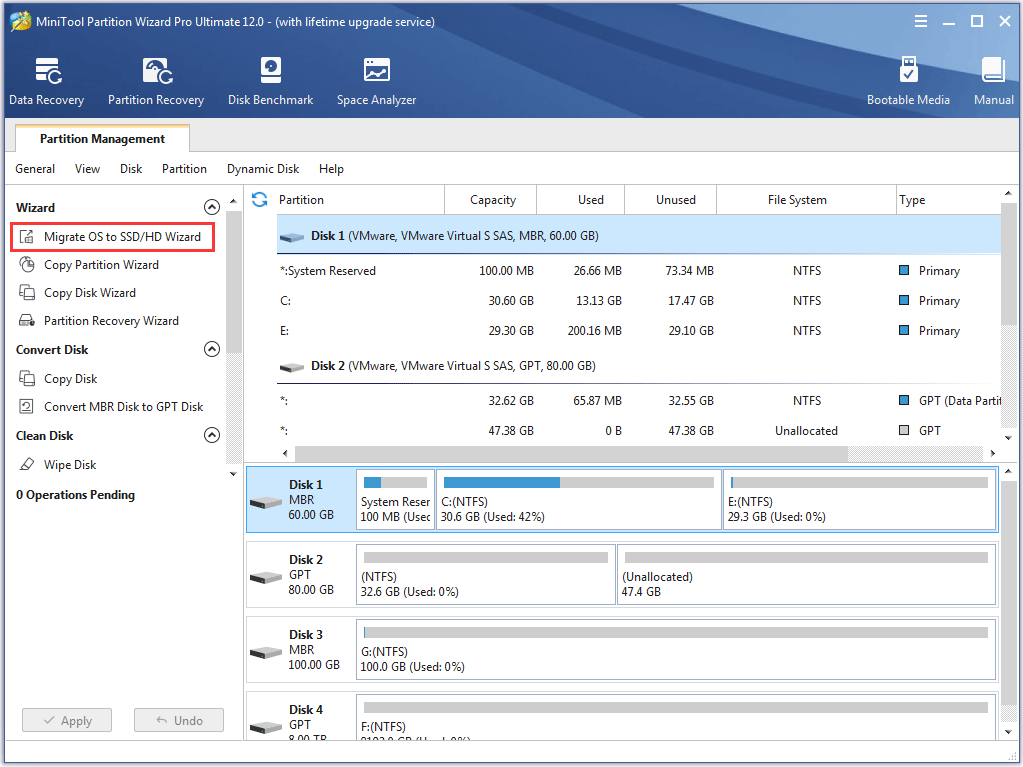 Step 3: Choose a suitable way to migrate OS, and then click the Next button to get the following window.

Step 5: In the new window, you are asked to edit the partition size and location, and choose one of the listed options you prefer. Since you will need to migrate OS to your SSD, please keep the Align partitions to 1MB option checked, which can improve your SSD performance. Finally, click the Next button.

Step 6: Read the not on the new pop=up window and click the Finish button.

Step 7: Click the Apply button on the main interface.

# Recover Lost Data from Your SSD

A survey from data recovery companies shows SSD takes a big portion in the storage media from which people often lose their data. Therefore, how to easily and timely recover lost data from SSD has become a topic of concern.

MiniTool Partition Wizard can also help you restore deleted data as well as recover data from lost partition, RAW partition and formatted partition from SSD or other storage devices. How to recover lost data for an SSD? Please read the recommended article below. 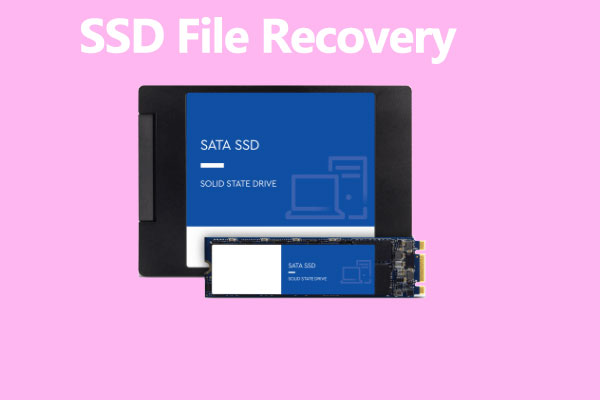 Data can get lost from SSD due to various reasons like accidental deletion, formatting, etc. To know how to perform SSD file recovery, check out this post now.

However, when recovering data from SSD with this tool, you have to pay attention to the Trim feature, which allows an operating system to inform an SSD which blocks of data are no longer considered in use and can be wiped internally.

If you mistakenly deleted files from an SSD with Trim enabled, you may have no chance to recover the lost data.

MiniTool Partition Wizard is a really useful and convenient toolkit to manage my SSD, like extending partitions, migrating OS from one disk to my SSD, and recovering the lost data from my SSD.Click to Tweet

Now, you may get a basic understanding of the transaction that Western Digital buys SanDisk. If you are not clear enough about this combination and have encountered some issues with your SSD or other storage devices, please leave comments or contact us via [email protected] and we will try our best to solve it one by one.

Western Digital acquired SanDisk on Otc.21, 2015. There were three reasons for this transaction.

You can try the following WD external hard drives.