MTG Arena, short for Magic: The Gathering Arena, is a free-to-play digital collectible card game developed and published by Wizards of the Coast. Since its release, this game has attracted lots of players. Sometimes, however, the game also runs into various errors such as MTG Arena get thread context failed, MTG Arena won't launch, and the one discussed in this post.

According to user reports, the MTG Arena invalid command line error can occur each time they try to start the game. Although there is still no official fix released by its developers, many users posted some proven methods in the Reddit forum to solve the MTGA invalid command line error. Here we summarize them as follows and provide detailed steps.

Step 1. Press the Win + R keys to open the Run dialog box, and then type appwiz.cpl in the box and hit Enter.

Step 2. Scroll down the list of installed programs to find Magic: The Gathering Arena, and then right-click it and select Uninstall. Then follow the on-screen prompts to complete the uninstallation.

Step 3. Open the Run dialog box again, and then type regedit in it and hit Enter. Then click on Yes to confirm this operation.

The following steps will clean everything related to the game. It is a risky process, so we highly recommend you back up your Registry in case anything goes wrong.

Step 4. In the Registry Editor window, locate the following path via the left navigation bar.

Step 5. With the Software folder selected in the left panel, locate the MTG Arena subfolder and delete all contents of the folder.

Once you uninstall the game completely, visit the official website of the game to download and install it. After that, you can start the game and see if the MTG invalid command line error disappears.

Are you troubled by the Steam Client WebHelper high CPU and memory usage issue? Don’t worry. This post provides 4 effective ways to fix it.

# 2. Run the MTGAinstaller from the Temporary Folder

Some users from the Reddit forum reported that they managed to get the Magic Arena invalid command line error solved by running the installer in the Temp folder. It’s worth having a try.

Step 1. Open the Run box, and then type %temp% in it and hit Enter.

Step 2. Inside the Temp folder, find the MTGAinstaller file, double click to run it, and see if it can fix the MTG Arena command line error.

# 3. Check for the Firewall or Antivirus Interference

Some other players find that their Windows Firewall blocks certain entries of the game, which may trigger the invalid command line MTG Arena error. In this case, you can try adding the game to the whitelist of your Firewall and antivirus software.

Step 1. Type firewall in the search box and then select the Windows Defender Firewall from the context menu.

Step 2. Click on Allow an app or feature through Windows Defender Firewall from the left pane. 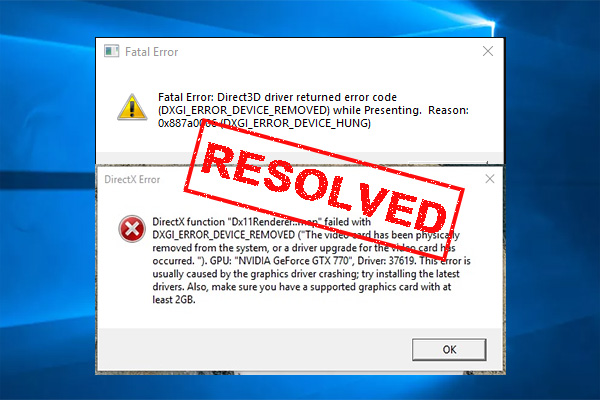 : Have you come across the “DXGI_ERROR_DEVICE_REMOVED” error? Now, you come to the right place. This post writes several effective ways to fix the DXGI error.