Group Policy is an important feature of the Microsoft NT family of Windows 11/10/8.1/7 and Windows Server 2003+. It can be used to control the working environment and specify managed configurations of user and computer accounts.

Sometimes, Group Policy can get outdated or corrupted, causing various errors such as “a workstation is out of compliance with the Group Policy”, “Group Policy not working”, etc. So, lots of users intend to update Group Policy. Here’s the need for the gpupdate /force command. How to use the GPUpdate command locally and remotely? Let’s keep reading. 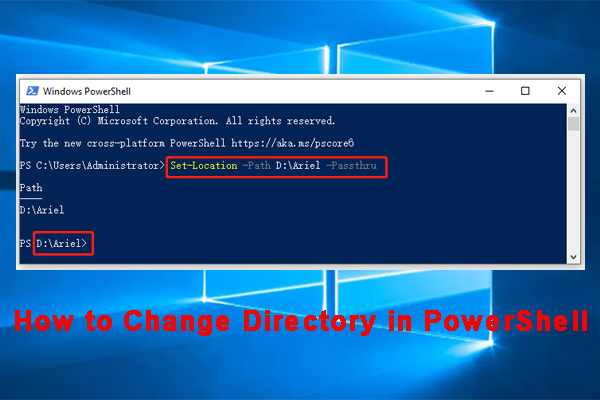 How to Change Directory in PowerShell Windows 10/11? [Full Guide]

What Is GPUpdate Force Command

Some other people are also confused about the difference between the GPUpdate VS GPUpdate /force commands. Here we summarize them as follows:

How to Force Group Policy Update on Local Computers

Now, you should have an overall understanding of the gpupdate force command. Let’s see how to force update Group Policy using CMD and PowerShell on local computers. For that:

Step 1. Type cmd in the Search box, and then right-click the Command Prompt window and select Run as administrator. Then click on Yes in the UAC window.

Step 3. Now, reboot your computer to make sure that all the policy settings are applied.

Step 5. If you want to automatically reboot the computer or log off after the CMD update Group Policy operation, you can run the corresponding commands below:

Similarly, you also can force Group Policy update in PowerShell using the GPUpdate command. The commands are the same as running in Command Prompt. To do this work, you can open the elevated PowerShell window from the start menu and run the following commands according to your needs.

How to rename file CMD on Windows 10/11? Now, you come to the right place. This post will explain the CMD rename file operation in detail.

How to Force Group Policy Update on Remote Computers

In addition, you can run the PowerShell/CMD Group Policy update command on a remote computer. To do so, you just need to open the elevated PowerShell or Command Prompt window, and then type the following command in it, and hit Enter. Here you need to specify the computer name and the RansomDelayInMinutes.

Make sure you replace Server 01 with the remote computer’s user name. The RansomDelayInMinutes command is used to lower the network load when updating lots of computers simultaneously. Here you can set it between 0 (run the update immediately and 44640 minutes (31 days).

If you were an administrator in the given organization unit, you can update the remote computers using the Group Policy Management Console. To do so, simply open the GPM console, and then right-click an OU, and click on Group Policy Update > Yes. Then it will update the user and computer policies on all the computers.