The Samsung Galaxy S series is a line of high-end Android smartphones produced by Samsung Electronics. The series includes the following phone products:

Recently, many people ask online how to fix the Samsung S7/S8/S9/S10/S20 apps crashing issue. If you are in the same case, you can refer to the following methods to solve the problem. 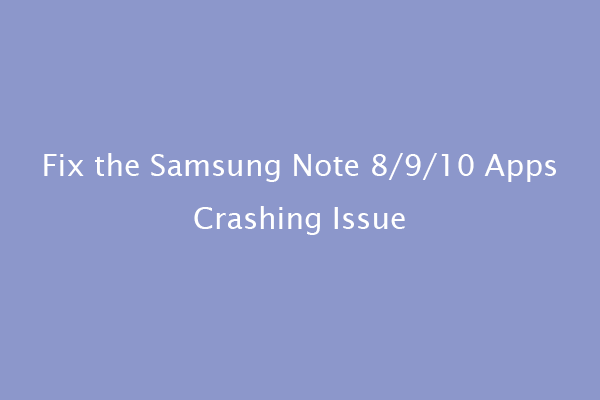 The apps on the Samsung Note 8/9/10 may keep crashing for some reason. This post offers you 3 easy ways to fix this issue.

Many people still use Samsung S7 and they may encounter the Samsung S7 all apps crashing issue. This phone has been released for many years. If you don’t update the system, it may be outdated and incompatible with newer apps.

Therefore, please update the system through the following steps:

If there are too many cache files on your phone, it will slow down your phone and even cause the Samsung S8 apps crashing or other issues. To solve the problem, you can clear the app data and cache through the following steps:

Running out of storage space on your device becomes more common the longer you've had it. When the storage is not enough, it’s common that the apps keep crashing Samsung S9 or on other phones. To solve the problem, you need to uninstall some apps to free up the space. Here is the guide:

When the phone is powered on:

When the phone is powered off: