Some people may have no clear idea about the relationship between SATA and SSD. They ask questions about SATA vs SSD online. In this post, MiniTool Partition Wizard explains the differences between them.

In forums, some people ask questions like SATA vs SSD, NVMe vs SSD, SATA vs NVMe, etc. To some extent, this indicates that they are confused about hard drive system, because SATA and SSD are not in the same category. In this part, I will introduce the whole hard drive system to you.

The hard drive we often say refers to the device that stores all the data of your computer, from the operating system files that govern your PC, the important work document that you absolutely can't lose, to the game also important to you.

2. How are hard drives classified?

According to different standards, hard drives can be divided into different types. For example:

Different Types of Hard Drives: Which One Should You Choose

In this part, I will answer the following questions: What is SATA hard drive? What is SSD? In addition, when it comes to SSD vs SATA, what's the difference between them? And, what's the relationship between them?

What Is SATA Hard Drive?

Note: There is an exception. If a drive is using M.2 connector, you should check whether it uses SATA bus or PCIe bus.

When a hard drive is produced, people should consider how to connect it to the computer and how to transfer data between the hard drive and the computer. To solve those problems, people make bus standards. SATA (Serial Advanced Technology Attachment) bus is one of such standards.

In general, when you get the bus of a hard drive, you can get the speed range easily. Then, please keep reading to get to know SATA speed.

Since the first SATA bus release, many advanced SATA bus versions has been released so far. Its main releases are displayed in the following list:

Apparently, SATA 1.0 and SATA 2.0 have been obsolete, but SATA 2.0 socket may still exist in some old devices. At present, SATA 3.0 is the main stream of hard drive interface (because higher speed hard drive is very expensive still). As for SATA Express, its popularization process can be said to be quite a failure.

The SSD controller is responsible for connecting the storage unit (flash memory) to the interface, so that the data can be transmitted to the computer; and responsible for the completion of various instructions within the SSD, such as data reading and writing, wear leveling (WL), bad block management, error checking and correcting (ECC), garbage collection (GC), etc.

The DRAM is a chip standing next to the controller chip. It serves a buffer between the SSD controller and the NAND flash memory, making the SSD process data faster.

To expand SSD capacity and lower the cost, manufacturers have made many efforts, for example, from plane NAND to 3D NAND, from SLC (single-level cell) to MLC (multi-level cell), TLC (triple-level cell), or even QLC (quad-level cell) NAND.

As for the SSD connector, it could be SATA, M.2, U.2, SAS or other shapes, depending what bus it supports.

Everything You Need to Know About Solid-state drive (SSD)

SATA and SSD are not conflicted with each other. They can be in the same item: SATA SSD.

Nowadays, many people like to use SSDs. Among these SSDs, SATA SSDs are very popular. Here are some reasons:

But SATA SSDs also have disadvantages. The biggest one is that SATA SSDs' speed limit is 6 Gbit/s. Comparing to other SSDs like M.2 PCIe 3.0 x 4 SSD(32 Gbit/s), it's slower. If PCIe SSDs or other higher-speed SSDs get popularized, SATA SSDs will be eliminated with no doubt.

If you like this method, please refer to this post: How to Install Windows 10 on a New Hard Drive (with Pictures).

But if your computer is dual-booted, or you just want to migrate the OS, or in other special situations, in a word, you don't want to use the above method, you can use the following method:

Step 1: Connect the new hard drive to the computer USB port via a connector adapter.

Step 3: Install this software on your computer (you can click the following button to download MiniTool Partition Wizard Trial Edition).

Step 4: Go to the main interface of the software. Then, click on Migrate OS to SSD/HDD in the action panel. 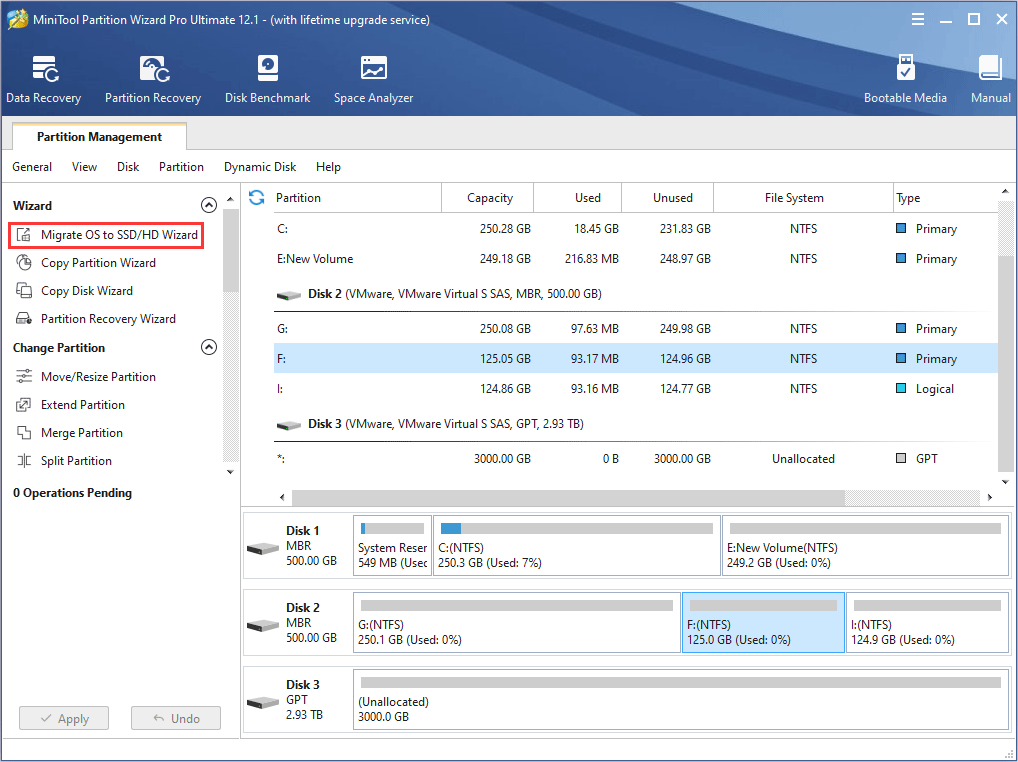 Step 6: Choose the new drive as the destination disk and then click Next.

Step 7: Review changes and click Next button. In this step, you can keep default settings. But if the old disk is a MBR disk and you want to use GPT style in the new disk, you can check the box before Use GUID partition table for the target disk.

Step 8: Read a note on how to boot from the destination disk and the click Finish button. Then, click the Apply button to execute pending operations.

Step 9: Disconnect the new drive from the USB port and then disassemble the computer to install the new hard drive. As for the hard drive installation guide, you can refer to this post: How to Install a Second Hard Drive in Your Laptop and Desktop PC.

Step 10: If necessary, you should change boot order in BIOS. Then, you can boot the computer from the new drive.

Here is a post talking about SSD vs SATA. SATA and SSD are two different things. If you can distinguish them, you can read this post.Click to Tweet

How much faster is SSD than SATA?
SATA is a kind of hard drive interface, while SSD is a type of hard drive that can use various interfaces, including SATA, M.2, SAS, etc. So, we can't say SSD is faster than SATA, unless you mean SATA HDD.
Is a SATA SSD worth it?
SATA SSD is very cost-effective. Although it is slower than some M.2 NVMe SSDs, its speed is enough for PC and its price is affordable. If you are not a person pursuing fastest hard drive, SATA SSD is worth it.
Is SATA the same as HDD?
SATA is just a hard drive connector. It can be added to both HDD and SSD. There are many SATA SSDs on the market.